I recently came across this Belgian King Leopold III stamp which matches the 1936 - 1951 definitive issue, except that instead of being perforated 14 x 13 1/2, it's imperforated.

A quick search of the internet threw up this matching pair which are described by the Ebay seller as "Michel: 528, 1940, Royalty, III. King Leopold imperforated pair"

My copy of Stanley Gibbons Benelux issues does not indicated the 1936 - 1951 series or the 2.5fr stamp was imperforated nor can I find a SG number for this stamp?

I get the feeling I am going to be asking a very obvious question here but can any Stampboards member provide me with the SG number of this stamp?

Thanks again for all your help folks,

Take a look at this http://auction.catawiki.com/kavels/480471-belgium-1931-1940- ... iii-stamps it lists a catalog that I am not familiar with but it has your stamp and a few like it. Might be a step in the right direction. Might have to translate the page into your language. If it doesn't work here is the text:

I have the 2009 copy of Scott and I found the perf stamp of this variety but it doesn't list any of this design in an imperf.
Top

Thank you so much for that. At least I now know that other stamps in the series were imperforated. I wonder why I can't find them in the Stanley Gibbons catalogue though? I bet it's a simple obvious answer

Thanks again and best wishes

Mike, I suspect that these were not a regular postal issue , they may have been released in connection with an exhibition or for a presentation folder on some occasion. I can't give a definitive answer. (maybe someone like Joel who is Belgian can give the reason)

However Gibbons will not list proofs, reprints, official issues or otherwise that were not on sale for postal purposes.
If Gibbons doesn't list them, then it stands to reason they wont have an SG Number !

Prinet is the first foreign-language catalog I ever bought, 42 years ago.
Top

Thanks Alex and Doug for your advice, perhaps one of the other members will be able to advise what these stamps were actually issued for?

Belgian stamps were routinely issued imperf in very small numbers, much as were the habit in France. Also as in France, the imperf were distributed to various VIPs; they usually did not have postal validity.

Only the Belgian COB / OPC catalogue lists and values them systematically. Yours is number 530 Ong-N.D. and is valued at 50€ in ** condition in the 2010 Edition.

Despite very small quantities issued, these stamps are almost all valued quite modestly. A collecting area to be discovered?

Thank you so much for taking the time to share that information with me, very detailed and useful thanks.

Do you know if the stamps are issued with or without gum as mine is mint with no gum?

memphre wrote:
Despite very small quantities issued, these stamps are almost all valued quite modestly. A collecting area to be discovered?

Agree. A ripe field to acquire when offered.

Memphre is right these stamps are routinely issued in small numbers, and are given to VIP, including members of the Royal Family. They are normally numbered at the back, and example #1 is reserved for the King. Also, for the most prominent VIPs, they are given in blocks of 4, which is even rarer.

The information I'm giving here pertains to Belgian stamps, but as Memphre mentions, both France and Belgium have a similar issuing policy for imperforates (with the obvious difference that there is no Royal Family in France).

Currently, 1000 examples of each new stamp are produced as imperforate. This wasn't always the case. Before 1971, smaller quantities were produced.

To echo Glen and Memphre, these are great to collect, and while they are generally inexpensive, it is harder to find those before 1958 (and they are of course more expensive).

It's also harder to find the blocks of 4 (much rarer), and examples with plate numbers (very rare of course, as there is only one per sheet, so even with a production run of 1000, there are only 33 available. Much less for smaller production runs).

Some themes are also very popular and hard to procure: the Olympic Games of 1920, with only 100 produced, routinely bring in high prices at auction (virtually impossible to get a set below 500 Euros)..and try getting the unique plate number from this set, since there is only one sheet of 100 produced...(Oh wait, for two of the three stamps, you can't, because they are in my collection...

, ok being a bit cheeky there, and to be fair there are rumors that two other sheets were produced. Harder to verify because they were produced in the US, so less reliable information in Belgium on that...).

For the Tin Hat set of 1919, only 50 sets were produced, so plate numbers are exceptional: only two sets exist, on of which was in the Karpov collection and was sold by Feldman a couple of years ago.

Thank you so much for what can only be described as a stunning and very informative reply. I have always loved a imperforate stamp and perhaps by accident I have found a new collecting area.

Thank you once again for taking the time to reply, it was very much appreciated,

Before you plunge in, you might write down some prices realized on Delcampe (Auctions) which (being located in Belgium) probably has many more of these than eBay does.

Also, the Delcampe Manager, Sebastien, is a member of SB and may be happy to comment on these items' collectibility and availability. Probably best not to become the Belgian-imperf "go-to" guy...lest a long sticky convoy roll into your town.

My dealer-friend in Zurich says he can scarcely sell French imperfs, there's too many floating around, and everybody knows it.
Top

I fully agree with Memphre, Glen and Joel.

I collect this type of stamps, but I confess I do not know many stamps dealers who have good stock of that material.

Currently I buy from Henry Gitner, a Big American stamp dealer who has an impressive price list of this kind of material.

I have searched others specialists stamp dealers in this type of material, but so far without success.

Does anyone know any Belgian or European stamp dealer who has a good stock of Belgian imperforate stamps?

Mike, thank you for the kind words!

Doug, you are right for a lot of the very modern imperfs, but special themes, blocks of 4 and plate numbers are rare and sought after, while the Belgian stamps before 1960 are rare and not that easy to get.

André, many thanks for your informative post. I actually did not know this about the French stamps, and that would explain why I can't find documentation about quantities issued.

On sources for the Belgian stamps, you can definitely go on Delcampe and find some, but most of the interesting ones are not cheap (or plentiful for that matter), and the do come up at auction in Belgium on a regular basis, but that's mostly for complete, fairly recent year sets (after 1965 generally), where they command only roughly 15% of catalog (but you also cannot choose as a result).

Here more information about the imperforate stamps of Belgium, taken from the latest catalog of the auction house Christoph Gärtner - Philatelic Sale - 31:

"Belgium Imperfs are issued in quantities of 1000 or less without gum & numbered on the reverse so each Imperf is unique!

From 1983 to 2009 most numbers are very low like 8 or 11 and these are said to come from the Secretary to the King or a very high Member of Parliament.

Belgium Imperfs are much scarcer than France as they are not regularly distributed to stamp dealers or collectors, so not many come to the market."

Joel, as you said earlier, the lots of imperforate stamps of Belgium of this auction are listed at an initial price of 15% of the catalog.

You could indicate some stamp auction house in Belgium which usually list this kind of lot?

Re: Belgium stamps not found in Scott.

This stamp matches the Scott Catalogue Belgium picture number A24 but I can't find the 25c blue, only a 35c (SC#57). Hmmm. Hope someone can tell me where to search. I looked for the aforementioned "Prinet" catalog in an Amazon, Google and local libraries search, to no avail. I also don't have access to Stanley Gibbons. That must be remedied.

Maybe Prinet has been subsumed by a larger publisher, like Ceres was (?) in France. My old catalogs, I never let go of them, some contain unique information.
Top

Prinet has been dead for decades. COB (French or Flemish version)
is far more comprehensive than Prinet ever was.
Jay Carrigan
http://www.jaypex.com
Top

Yay!! I can always depend on Stampboards members!! Special thanks for the info on COB.

Gibbons Benelux catalogue Part 4, now at Issue 5 2003 is an acceptable alternative but lacks many of the nuances found in COB. www.philately.post.be.

I'm not fluent in French or Flemish. Is the Benelux really an acceptable alternative, in your opinion?
Top

Here more information about the imperforate stamps of Belgium, taken from the latest catalog of the auction house Christoph Gärtner - Philatelic Sale - 31:

"Belgium Imperfs are issued in quantities of 1000 or less without gum & numbered on the reverse so each Imperf is unique!

From 1983 to 2009 most numbers are very low like 8 or 11 and these are said to come from the Secretary to the King or a very high Member of Parliament.

Belgium Imperfs are much scarcer than France as they are not regularly distributed to stamp dealers or collectors, so not many come to the market."

Great info on this thread.

Just bought an interesting lot of 56 different of these Belgium imperf stamp from 1970s to 1990s, each with a unique number at the back and the quantity of each in the world is less than 1000. (Stock 379QJ - just a few $'s apiece) Of these numbered imperf proofs, we have almost no images above, so have added some here - 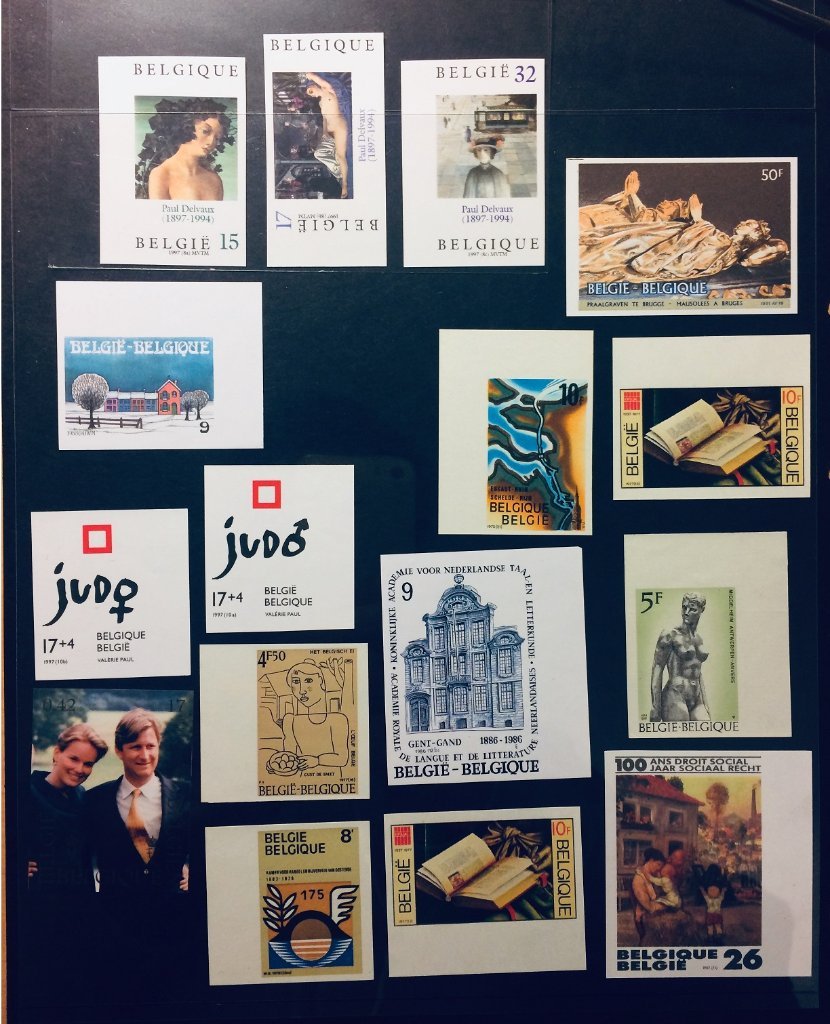 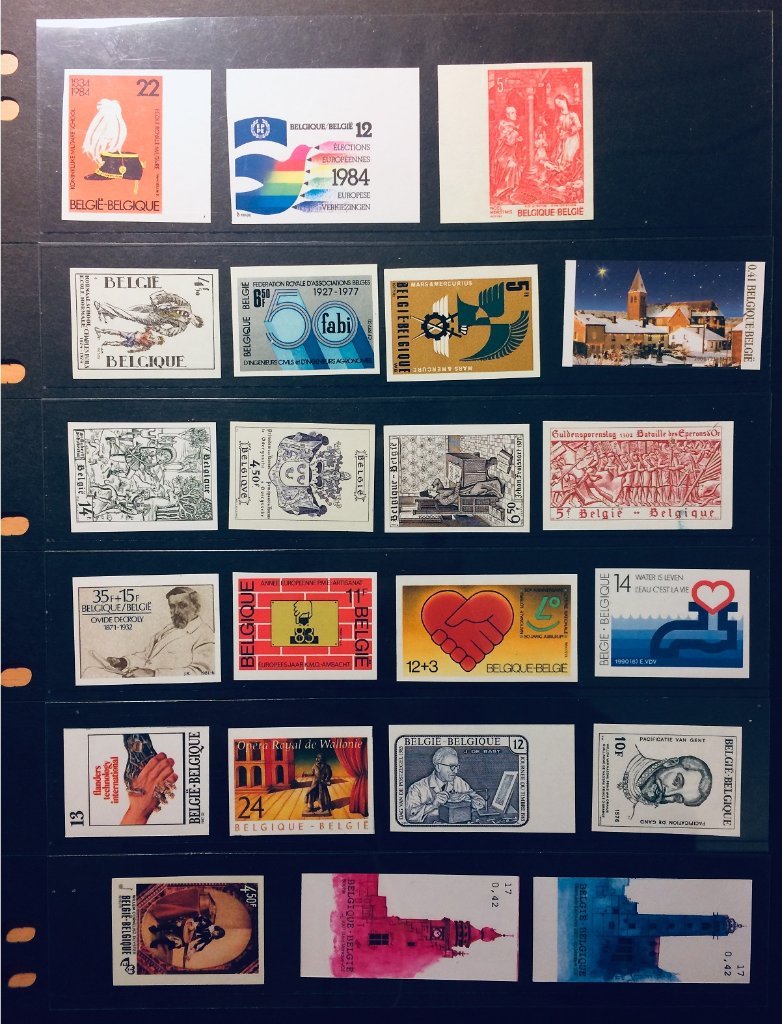 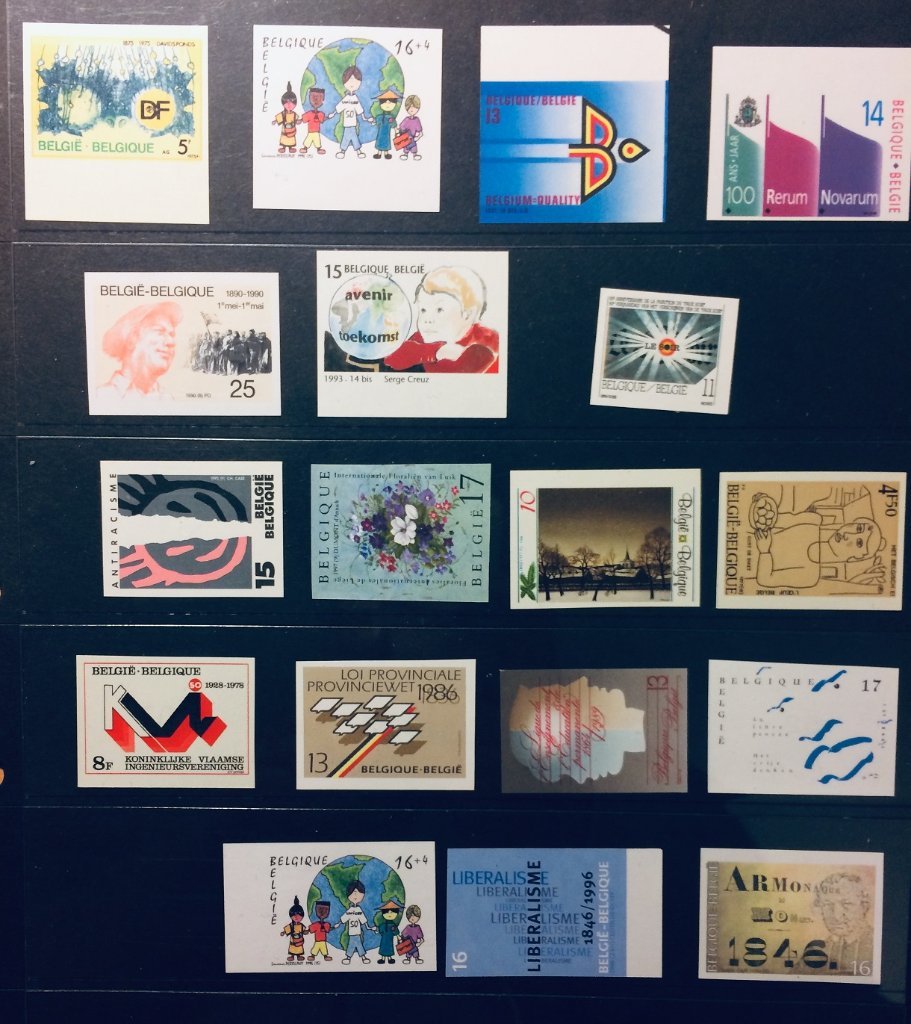 Belgium IMPERFORATED and individually numbered proof stamps, made for VIPs and Royalty etc. 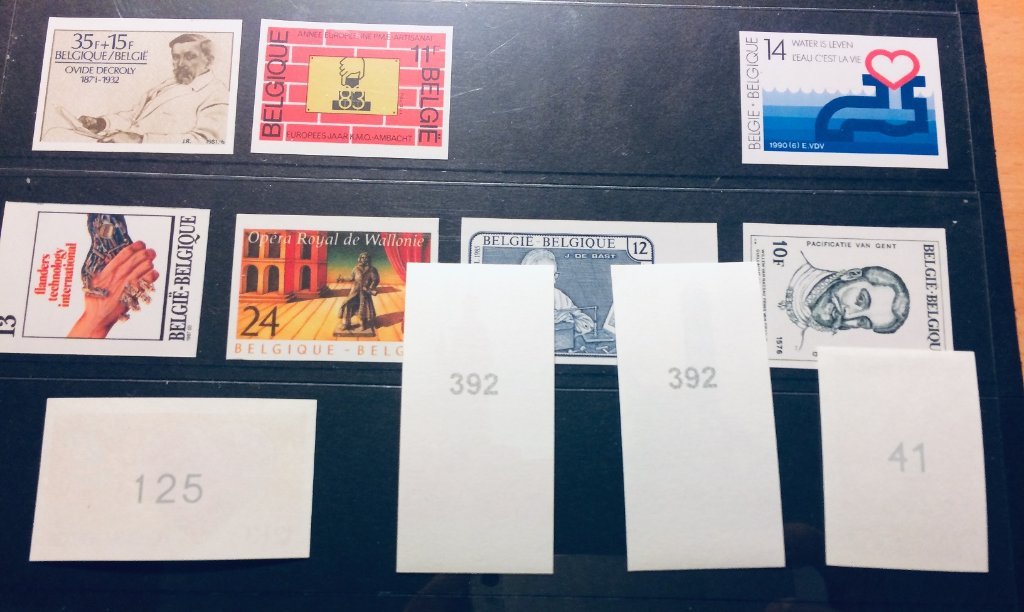