Here is a link to a blog post by the United States Postal Service Office of Inspector General, entitled "Jenny Come Lately" posted in 2015:

It has a remarkable 383 comments on it. Have not been through them all. People seem to be complaining about the creation of an artificial rarity that they have no hope of buying.

Maybe Australia Post took heed of this with their unlimited "missing Australia's" in the 2020 Yearbook.

Has anyone seen anything more recent from the Inspector General on the Jenny issue? 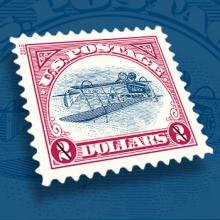 Think stamps are only worth the paper they’re printed on? Philatelists will tell you to think again. The tiny One-Cent Magenta stamp, now on display at the National Postal Museum, recently sold for $9.5 million.

Of course, that sole-surviving stamp of the British Guiana penny issues is the rarest stamp in the world. Other stamps deemed collectible by the philatelic community are also worth a pretty penny.

Take the 1918 Inverted Jenny 24-cent airmail stamp. It is one of the world’s most collectible stamps because a sheet of 100 misprinted stamps showing an upside-down biplane was accidently sold to a customer. In today’s market, an Inverted Jenny stamp could fetch close to $1 million.

Yes, collectors are passionate about their stamps. Indeed, stamp collecting even has a month – October – designated to recognize an activity that can range from a hobby to an obsession. Two years ago to celebrate National Stamp Collecting Month, the U.S. Postal Service reissued 2.2 million Inverted Jenny souvenir stamp sheets. The souvenir stamp sheets feature six $2 stamps and sells for $12. Collectors could buy the stamps at select postal retail counters and through USPS.com, eBay.com, and by ordering via a toll free phone number. The Postal Service’s goal was to sell all 2.2 million stamp sheets in the first 60 days for $26.4 million in revenue. As of March 31, total stamp sales were about $13 million.

While an innovative idea, this action had the unintended consequence of creating and improperly distributing a philatelic rarity, our recent management advisory noted. The Postal Service strongly and inappropriately influenced the secondary market by creating a rarity, the report said. In 2014, at least two Un-Inverted Jenny stamp sheets sold for more than $50,000 each. Our report recommended the Postal Service develop a formal process for philatelic promotions.

What reaction did you have to the issuance of the upright Jenny stamp? What types of activities do you think would enhance support of the philatelic program?

US Post Office / Office of the Inspector General audit report from 2015; Link here:

The distribution plan for the error sheets was not approved.

In December 2014, "The Postal Service employees randomly selected three customers to receive a free Un-Inverted Jenny stamp sheet" which seems to have got a lot of noses out of joint.

This report is obviously dated, at the time only 20 Un-Inverted sheets had been officially reported ("registered" in official parlance).
Top

My order just came in, sooooo! 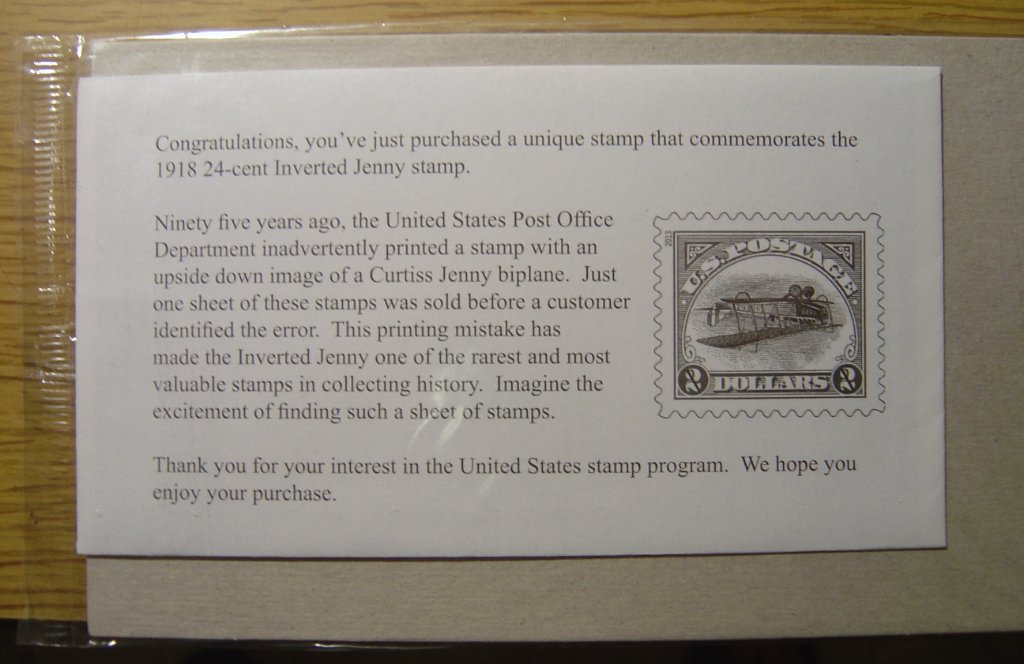 If you look at the left and right sides you can just make out the edges of the card enclosed over the M/S. 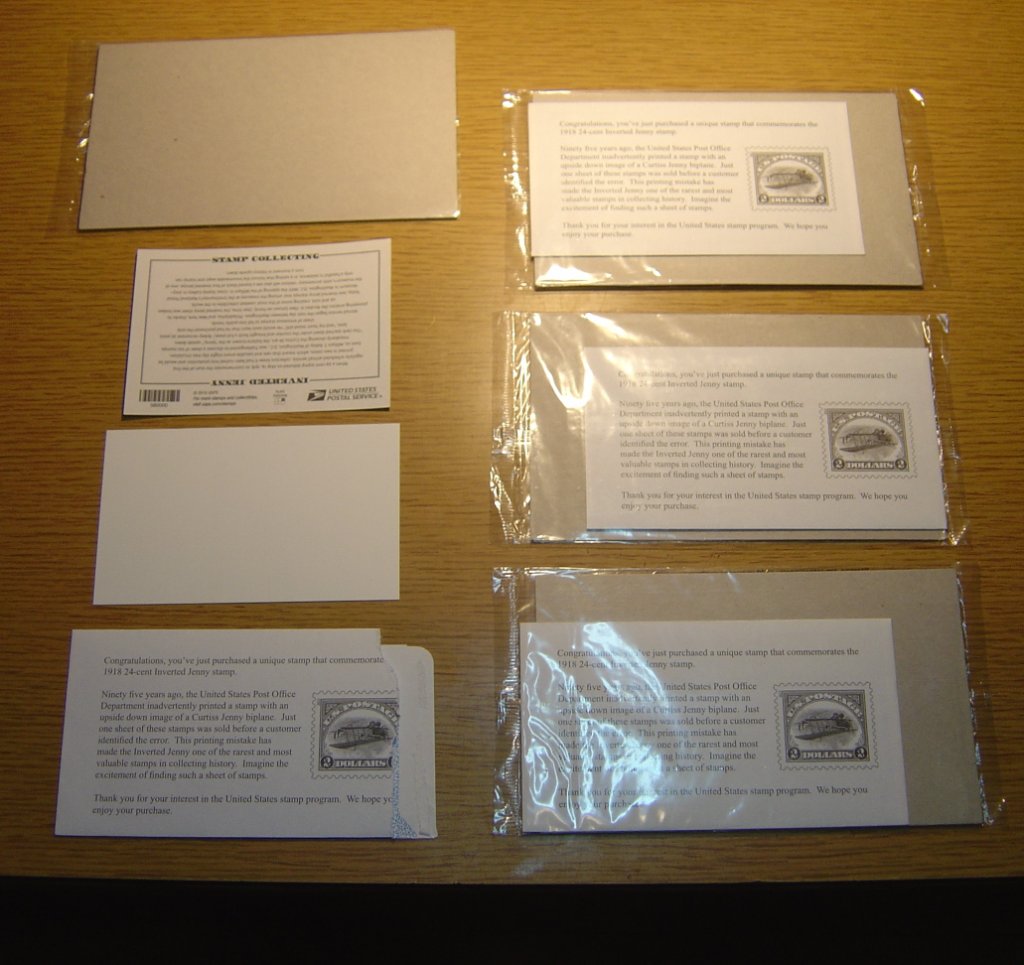 Here is one exploded in the order from front to back.

It is possible that if the white index card had any printing on the front side facing the outer envelope that the printing would be discernable to someone looking for it! 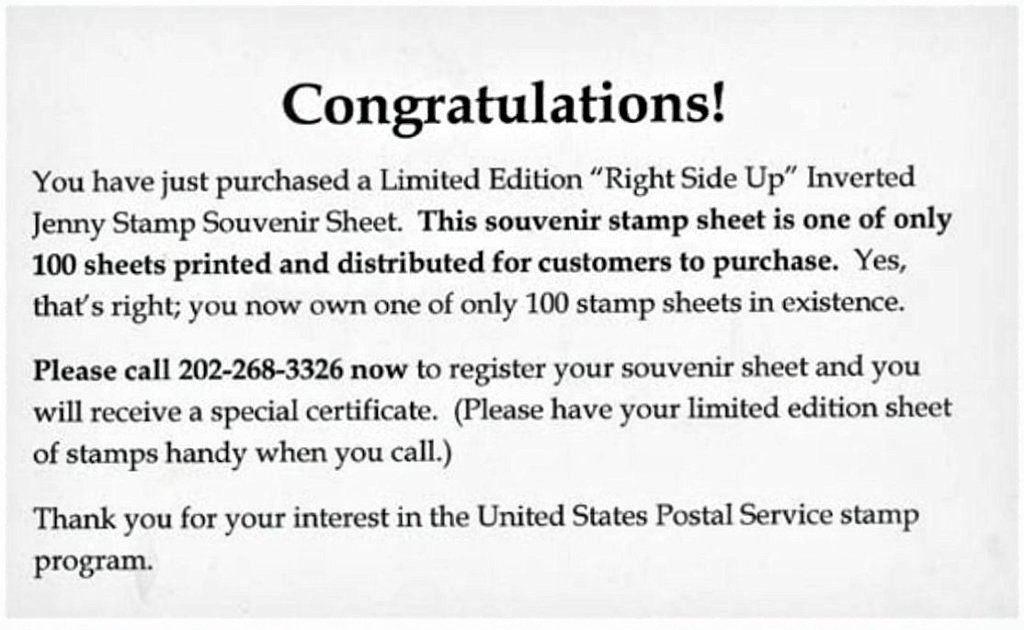 The bold typeface and the large point size used for the word Congratulations! would be able to be seen very easily if the card is inserted face up.

https://www.linns.com/news/us-stamps-postal-history/collect ... f-$2-jenny
My address has changed and is available upon request.

And it’s still not specific.

Towards the end it says 32 at late 2017, and 3 recently, but does that make only 35 out of the 100?
Ian Billings - Norvic Philatelics - Not looking at all threads. If you need an answer please quote my post or use board email. What I post is available, unless otherwise stated or copied from elsewhere, as I reduce a roomful of 'stuff'. GB stamps info: https://blog.norphil.co.uk, NPhilatelics on twitter, www norphil.co.uk, shop.norphil.co.uk for our e-commerce site
Top

Thought I'd see how many of the 2013 issued sheets were left in stock on the USPS site (link posted above.) whilst I'm killing time waiting for a zoom meeting to begin about a gift-lifestyle trade show that is now postponed due to new restrictions on people entering QLD from NSW.

Turns out there's some 24,543 sheets still awaiting a home.

Soooooo, if the remaining inverted 'inverted Jenny's' are still in the USPS stock the chances of getting one now is significantly higher than when they were issued in 2013

Of course, there is no chance that the reminder of the 'upright' sheets all remain in the last of the stock. If any do.

Chkpoint Charlie wrote: ↑
24 Jun 2021 04:32
The bold typeface and the large point size used for the word Congratulations! would be able to be seen very easily if the card is inserted face up.

briggia wrote:Turns out there's some 24,543 sheets still awaiting a home.

"*A market is defined as a large city such as New York, Los Angeles, or Chicago. A philatelic procurement specialist
analyzed data from the Solution Enterprise Asset Management system to identify the top 50 markets based on total stamp sales."

The major complaint seems to be that the distribution was lop-sided and seemingly went to large POs. Thus a customer buying some sheets in a small town PO had little chance. You can see the PO's thinking here: let's reward existing philatelic buyers. But this deprived small-town customers.

Three sheets from SFS were randomly given to existing customers to quell the anger.

With such a low number still available, it seems unlikely that there is a mother lode of c.50+ Uninverted Sheets awaiting discovery.

If the PO electronically tracked when an error sheet was sold, that would be way open to abuse as well by giving away the location of the sheets. Seems to have been a big mistake not to number the sheets 1/100 etc. and let collectors self-report to Linns or the APS.

Granted hard information is difficult to source. Maybe someone could ask Linns to update the present "count", at least as far as is known.
Top
Post Reply
408 posts