I have been collecting Queensland 2 line registered handstamps for a while now (up till 1913) and am slowly putting my best examples on my website.

I have put up all my evelope examples and with the rest I have done a-f.

It will probably take a couple of months to put the rest up, so please have a look every month or so if you are interested in this material.

In 1997 in his book Queensland Postal History & Australian Numeral Cancellations Supplements he supplied an updated list on pp. 27-29. I have not compared the two lists but presumably the 1997 list is more comprehensive.

The links to the ones not listed by Campbell that I have put up on my website so far are:

without a registered handstamp. Campbell does not list a handstamp for this post office so presumably it was never made, lost or never used?

I am also missing many of those listed by Campbell and am interested in adding them to my collection.

Jeremy - no thread works well on this board unless you add some actual images to discuss. 8)

That is how stampboards works.

Use the "IMG" box or IMG tags, and you will give us all something to look at and comment on.

Yes Jeremy, an image is worth a thousand URL's

sorry guys, will do so soon
Top

Some more not listed by Campbell

I am getting the hang of this now

The exact same kind of 2 line Qld handstamps were used in Papua from 1901 .. do you collect those too?
.
Click HERE to see superb, RARE and unusual stamps, at FIXED low nett prices, high rez photos, and NO buyer fees etc!
Top

No I do not collect them Glen. All I collect in that line is Queensland stamps used in Papua but they are scarce and very expensive so I only have a handful of Queensland stamps with Papua markings. The registered handstamps I have shown here in this thread are pretty fragmentery so here is an example of what a complete one looks like.

This is a Cordalba 2 line registered handsatmp. The Cordalba post office opened in 1896 and is 11 km north west of Childers. The unframed circular datestamp is type 3c, dated 6 December 1904 and is listed as scarce. This is the latest known date for this datestamp type at this post office. The barred numeral number is 537 and is listed as scarce.
Top

Here are two more not recorded by Campbell

This one is not recorded by campbell either. Donaldson 2 line registered handstamp. The post office is 88 km north of Cloncurry and opened in 1895. 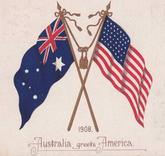 I'm no specialist in postmarkings for Qld (so please excuse the question/query.)

Most of the registered markings appear with the 1d and 2d from latter stamp issues of Queensland - when was the two line registered hand stamp first used?

I went through my stockbook of Qld and found the three items below - I'm guessing one is 'Paddington', any idea on the other two (or even whether these are samples of the two line registered stamp? - earlier issues than the 1d/2d samples you have listed - or are they earlier issues being used at a later date?)

They are all examples of the 2 line registered handstamp. Acording to Campbell, the handstamps with the lettering 3.5 to 5 mm high were issued up to around 1872, but of course many were then in use all the way to around 1913. The larger handstamps, with letters 5 to 6.5 mm high, were progressively introduced from 1873 onwards.

Ldine is Barcaldine
Roy is probably Croydon as the first letter looks like it could be a C. Other possibilities are Kingaroy, Cooroy or Collaroy.
Ding is probably Paddington
Top

Very Good - I try to do as well but one does need to know all of the possibilities!
Kev.
Top

Same with me Kev. I don't add them unless I am certain. If I can't be sure it is most unlikely that anyone else can be sure.
Top

Jeremy's own reverse list can be MOST useful folks, when added to Mr Gates features. :

Bring up that post, hit the CTRL and F buttons together, and type in the letter you are CLEARLY see like LDINE and youi are done! 8) 8)
Top

Here is the nicest looking 'eye appeal" one I've owned for a while.

Clean and fresh with no toning or foxing whatever. 1904 to Hobart in the COMMONWEALTH period. The attraction of being a black edged "Mourning" envelope adds to the visual appeal.

Sharp tying strokes of the numeral 636 - a rare postmark rated RRRR. (3 strikes here!) And a strong 2 line tying Registered handstamps of "REGISTERED/FINCH HATTON" and the cds as well - a crisp "Finch Hatton 29 Jul - 07".

An array of handstamps on the reverse including yet another of the scarce "REGISTERED/FINCH HATTON". Gladstone and Mackay transits. Hobart arrival. nice TPO cancel - "T.P.O. No. 1 I.N.Cc - DOWN 31 JY - 07"

I have been working on a scarcity rating for Queensland 2 line registered handstamps and R in Oval handstamps based on my own collection and the lists compiled by Campbell. I have worked on the assumption that Campbell had access, though his own and other extensive collections, to many more examples then I have. I have therefore devised a rating as follows:

This is a work in progress and comments are welcome. I am slowly putting up my best examples on my website at http://jeremy29.smugmug.com/Queensland%20Philately/236606 and am up to M so far.

Here is the first part of my list, A-B

The Table does not reproduce well so here is how it works.

This means that the registered handstamp for Birralee is a 2R. The X signifies that this post office also used an R in Oval handstamp and that scarcity rating is 2R.

Another one for Jeremy's list,
I received the latest Sydney Views today (issue 98 )
and it has a newly discovered registered handstamp for
LIMESTONE tied to numeral 467 (the title of the article has a
typo)

(PS Jeremy is out of town so he may not update this for
a couple of months yet).
Top

Yeah, I am in Darwin and then Elcho Island for the next couple of months but I am on line.

Pity I couldn't bring my stamps with me though

GREAT place for them to get toned up there Jeremy.

That's why they are staying at home Glen

Buried in a pile of crud.

Andrew we always aak members post the LINK for ebay lots, with the PHOTO saved in photobucket so it stays here forever. 8)

Actually the One mile Creek 2 line handstamp is fairly common

Actually, it's amazing how often you can find hidden gems in lots
like this. Varieties that hardly anyone knows of

Maybe it should be called "research" grade ?

Here's one I recently saw in a small QLD lot, it has a bad corner,
short perfs and goodness knows what other flaws,
but it is the first example I've ever seen with the perf inverted!
(or is it upside down?)
Andrew

PS Thanks Jeremy for letting me know it was a common cancel!

well spotted Andrew. I have been looking out for inverted OS perfins since I started and have yet to find one. From memory, Dave's website (I don't have the address with me but if you find it you can post it), lists some examples of QLD OS inverted and back to front perfs. I think yours is inverted.

Jeremy, I know the page you mean, I think it is just on the varying number of holes. Anyway, I'm going to start a new thread in
the images area to keep this one on topic!

Apologies for not upgrading the list guys, but I am still up in the Northern Territory and won't be down south for a while yet. But, good things come to those who wait

I also found two of these cancels, but I don`t know which towns they are!

I also found two of these cancels, but I don`t know which towns they are!

Yes Mount Morgan seems a VERY accurate suggestion to me.

Maybe these two could also be such kind of cancels?

Second one I'd say is CUNNAMULLA

Here is the nicest looking 'eye appeal" one I've owned for a while.

Clean and fresh with no toning or foxing whatever. 1904 to Hobart in the COMMONWEALTH period. The attraction of being a black edged "Mourning" envelope adds to the visual appeal.

Sharp tying strokes of the numeral 636 - a rare postmark rated RRRR. (3 strikes here!) And a strong 2 line tying Registered handstamps of "REGISTERED/FINCH HATTON" and the cds as well - a crisp "Finch Hatton 29 Jul - 07".

An array of handstamps on the reverse including yet another of the scarce "REGISTERED/FINCH HATTON". Gladstone and Mackay transits. Hobart arrival. nice TPO cancel - "T.P.O. No. 1 I.N.Cc - DOWN 31 JY - 07"


What a lovely cover - Bernie
Top

The Finch Hatton postmaster must have been very good at the art of postmarking. Here is the example I have.

A series of 2 line registered markings that are not listed by Campbell.

"Bernie" above is Bernard Manning who has recently publshed a 250 page Qld cds handbook.

He is looking to do a work on these straight line handstamps he tells me.
.
Click HERE to see superb RARE & unusual stamps - FIXED low nett prices, high rez pix + NO 20% buyer fees!
Top

Nice to see you posting here. I was lucky enough to buy the cover that you like from Glen. I dont collect for the markings. I just thought it was a great Commonwealth era cover so grabbed it. Its a very nice item and Philataly as art in my mind.

DW's Finch Hatton and mine must have come from the same sender I recon. Nice cover DW.

As his April 1, 2008 member data shows, Bernie has been a member for about 18 months, but was not entirely sure how the board worked.

He made a long phone call to me this week, and I was able to walk him through the way the board works, and he got the hang of it fast, and I suspect there will be no stopping him now.

I sold a book today to Didge our Kangaroo resident expert above, as Bernie very helpfully rates the different Qld numeral on Roos and KGV.

I asked Bernie out of curiosity what a well struck "RRRRR" number like this 713 on a 1d roo would fetch at auction. He said something in the order of $250 would not surprise him at all.

Proving my long held adage that "Knowledge Is Power" ... didge or others finding one of these or something else similar, in a junk lot, once in his life, and the book is paid for twice over, essentially.

Users browsing this forum: No registered users and 6 guests