We have "Nice covers","Wartime covers", "First flight covers" and others devoted to this aspect of philately.

But what about those covers that are just so crammed full of stamps, writing, cachets, etiquettes, etc. that you can hardly see the paper

Here is a what I call a "busy" one, an Australia to New Zealand boomerang cover, registered, first flight cachets both ways, underpaid so 6d. worth of postage dues on the back and multiple cancels.

I know Uncle Andrew does have a lot, just waiting him to have his PCs fixed, then only we can see his "busy" covers here. 8)
Top

I also personally like covers COVERED in stamps and handstamps.

A few things I have sold off my rarity page recently are below.

This one was great with 1d Red Die THREE and others!

Is there a backstamp for the return flight with a date?
Top

Slayer wrote:
Lovely Xmas '31 flight there Admin- and not too many carried too

Is there a backstamp for the return flight with a date?

It sold to a member here .. so can't be sure - sorry!
.
Click HERE to see superb, RARE and unusual stamps, at FIXED low nett prices, high rez photos, and NO buyer fees etc!
Top

That last cover above is sure a beauty
and a very busy one too. Love it.

Andrew - I lived in that little town of Ararat, and my Father was born there, so it was quite a nice thing to handle!

I can imagine the sentiment attached.
Hope the new owner keeps
it well to admire and cherish for many years to come.

Here is another one, a colourful early QANTAS 1926 flight cover (one I really like by the way 8) ).

Registered and cacheted Charleville to Camooweal thence Cloncurry, thence Townsville, thence Birsbane. After that a rail and boat trip to it's final destination in Launceston.

Klagenfurt, Austria, 1943. Sent to a stamp dealer in Switzerland

I was really drooling over those suberp cancellations.
And they look so nice against all that colour.
Qlds would have really loved this cover.

Here is a contribution to 'busy cover' section.

I hope you enjoy.

13 stamps and quite a variety,
with those cancellations,
both the letter and the sender have been busy....

That's quite a cover.

Here is a contribution to 'busy cover' section.

I hope you enjoy.

It is Great cover! The stamps on the cover is very nice!

I don't read German
but it sure looks like a lot of people
have scribbled on it
and it has seen many places.

Love all those circular cancellations.
Would probably appreciate them more if I could read German.

The expert note, is just about a plate flaw. As far as I know there are just 3 statonarys known with that flaw.
Top

I was really drooling over those suberp cancellations.
And they look so nice against all that colour.
Qlds would have really loved this cover.

Yes Andrew, it is one that he would have liked. Those Charleville & Camooweal cancels spell out the real Queensland for me.

Here's another fairly busy one, a 1934 first flight cover, Toorak to Moresby and return.

Also has an OS o/print on 6d. Airmail Service 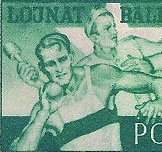 pirano
I was online for our Birthday Number 3!

Per first Experimental Flight? What, exactly, were they experimenting with?

pirano wrote: Per first Experimental Flight? What, exactly, were they experimenting with?

The laws of physics

pirano
I was online for our Birthday Number 3!

Didn't hurt that the addressee was a man of the cloth!
Collecting used stamps and covers worldwide. Thematic focus: journalism (newspapers, television, radio, news agencies, etc), athletics (aka track and field) and refugee and migrant issues. Strong interest in covers and postal history of areas of the former Yugoslavia, Trieste (Zones A and B) and northeastern Italy.
Top

), Queensland. to England.
Underpaid, so 3d charged at destination.
3d due cancelled with Finsbury Park cds.

I have 2 questions with this cover:
1. Can anyone say why someone has written 'posted out of course' at the top??
2. Why the numbers 134 under the '3d to pay' stamp?

This cover sure has a lot of character:

Love those two Papua New Guinea stamps in particular
and the bold cancellations on the Australian ones.
The First flight violet cancellation makes it even more interesting.
Also like the bold handwriting.
We just don't get mail like this anymore.
Thanks for sharing this one too.

This sure was some busy cover,
that went from Beerburrum on the 22nd of April
(I think that's what I can make out of the scan on my screen)
and reached London on the 2nd of May
getting taxed, on top of that
(after going to 2 different addresses in London
(the first probably scratched and the new address
put in by a person residing in the first London address (?).

Can you shed any light on the "posted out of course"
at the top of the envelope?

Thanks for sharing it.

I have not seen those small oval markings with the numbers before. I presume they are Dutch, not German - can you advise

yes dutch - mailman postmark, a mailman a postmark, for every effort one...
Top

Must have been a quiet time in the Barwani postal system when this went through in 1934. The originating PO (Niwali) cancelled it, and the transit PO (Pansemal) whacked it twice before it reached its destination at Palsud, which also postmarked it. Pity the sender didn't leave more room on the Address side for a few more postmarks along the way ...

Here are a few more 'busy/semi-busy' covers to add to the list.

I hope you find something of interest.

Here is a much travelled cover with lots of backstamps / transit marks.

West Australian Airways' contract for the subsidised Perth - Adelaide airmail service ended in April 1934. This cover is postmarked 2 April 1934 in Perth and was flown on the first flight of the new unsubsidised service.

It is addressed to Auckland and was also flown on Ulm's first official airmail from Australia to New Zealand on 11 -12 April. There is an Auckland backstamp of 12 April and a faint official cachet on the back.

After delivery in Auckland, the cover was re-addressed back to Perth and flown on Ulm's second official New Zealand - Australia airmail flight. The back of the cover has the set of three New Zealand airmail stamps postmarked 13 April, a Kaitaia postmark of 14 April, a Sydney backstamp of 14 April and a Perth backstamp of 20 April.

The cover had not finished its travels. It was re-addressed once again, this time to Camberwell in Victoria and there are further backstamps of 24 April in Perth, 28 April in Melbourne and 30 April in Camberwell.
Last edited by rgc119 on 19 Dec 2008 23:56, edited 1 time in total.
My website: "New Zealand Stamp Images", at www.nzstamps.org.uk describes New Zealand philately, postage stamps, airmails and postal history.
Top

Thanks everyone for sharing your superb "busy" covers 8)

This is one of 48 covers on the first acceptance of airmail from New Zealand to Khartoum in Sudan.

It started its journey on 28 June 1932 in Gisborne and has the New Zealand - Africa cachet and a transit mark at Cairo on 30 July. The TPO mark at Shellal - Halfa on 6 August shows that the last leg to Khartoum must have been by train. It has a returned to sender cachet and a Khartoum postmark on 16 September when it presumably started its return journey. There is a Port Sudan (which is on the Red Sea) transit mark on 19 September showing that was where its return jouney by sea began. Par Avion is scored out showing that it was not flown on the return journey.

The thing about busy covers is that the transit marks can tell quite a story.
Cheers
Bob
Last edited by rgc119 on 19 Dec 2008 23:56, edited 1 time in total.
My website: "New Zealand Stamp Images", at www.nzstamps.org.uk describes New Zealand philately, postage stamps, airmails and postal history.
Top

Here are a couple more images of 'busy covers' from Stampex '86 in Adelaide.

Whilst purely of a philatelic nature and not going through the post they surely travelled a lot between the participating countries philatelic bureaus accumulating almost 40 cancels each.

Apologies for the less than clear images but they were done with a digital camera as these big suckers were way too large for my little old flat bed scanner.

Anyway I hope you enjoy,

Bet those are only a few around.

So far that's the "busiest" cover shown here by far:!:
Tony
"A cancelled stamp tells part of the story, a cover tells it all"
Top

You want to see a "busy" cover??? Then here goes. I got this last week from doug2222usa. It has more stamps than I can scan on an A4 scanner

Now that's what I call sending a cover!

Here's a reasonably busy one that one of my spotters picked up for me.
We are Geelong, the greatest team of all.
Top

Here is a cover with four registration labels for the four journeys it was sent on as well as a wide range of stamps including the complete 1931 New Zealand airmail set and 1898 pictorials.

The Christmas cachets and receiving marks are on the back.

Thanks for sharing the above scan. Never seen a cover with 2, let alone 4 registered labels. I wonder whether this are normally allowed. I must ask the local post office clerk.

It has been a while between posts as I am still working on upgrading my scanner to a decent Canon.
But in the interim here is a well travelled Victorian government cover 'ON PUBLIC SERVICE ONLY' posted around November 1898 to suburban Carlton that bounced around Melbourne for a couple of months until I assume the postal authorities gave up on delivering item in January 1899.Someone has cannibalised the stamp,in the past, but there are copious hand stamps and cachets attesting to difficulties in sending this little gem on it's way.Considering the number of hands it would passed through it's condition is quite good and it is a lovely piece of postal history and perserverence!

I hope you find it interesting.

Here ya go. I could not believe this one when it got here.