A *LARGE* percentage of stamp collectors also collect various numismatic areas. This is YOUR little corner of the board to ask questions, seek advice, check values, and chat. Please join in! 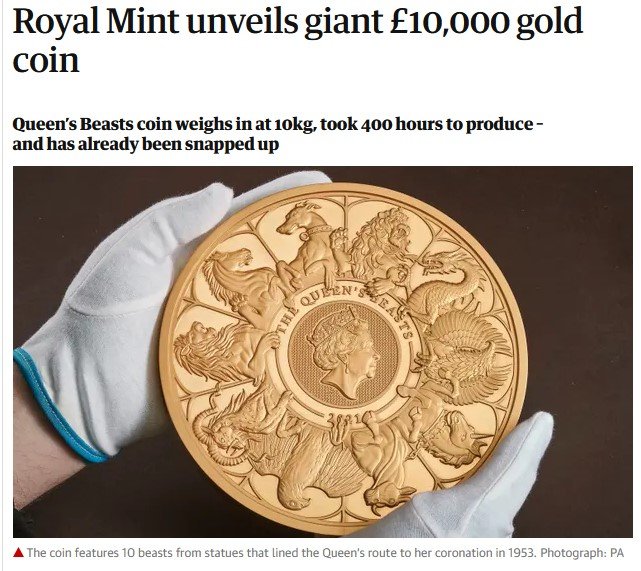 The coin features 10 beasts from statues that lined the Queen’s route to her coronation in 1953. Photograph: PA


The Royal Mint has produced a 10kg (22lb) gold coin, the biggest in its 1,100-year history. It took 400 hours to produce the coin – described by the Mint as a “masterwork” – including four days of polishing.

The coin has already been sold. The Mint did not give details about the sale or buyer, but said a coin of this calibre and craftsmanship would be priced in the region of six figures.

The 20cm-wide coin was created by a team of master craftspeople at the Mint, combining traditional skills with innovative technology. Modern techniques were used at the start of the process, with engraving machines used to carefully cut the design on to the coin, which has a denomination of £10,000.

A master toolmaker then hand-worked the coin, removing any marks made by the cutting process, before four days of polishing. Finally, the coin was laser-frosted to texture the surface. 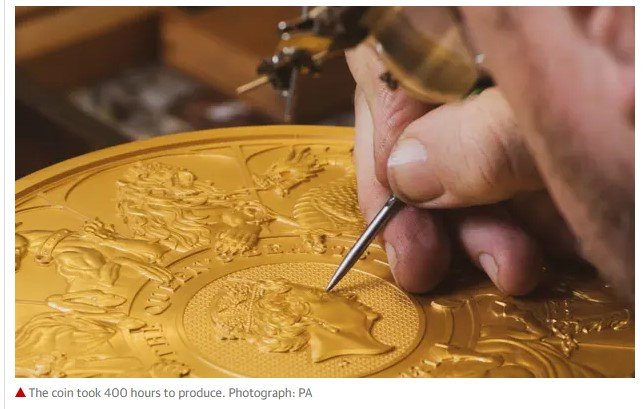 For those whose budgets would not have stretched to buy the coin, versions of the design are available in a range of finishes, with prices starting at £13 for a £5 denomination uncirculated coin.

The coin marks the conclusion of the Mint’s Queen’s Beasts commemorative coin collection. The series took its inspiration from 10 statues that lined the Queen’s route to Westminster Abbey at her coronation in 1953.

Starting with the Lion of England in 2017, the collection has showcased the history and symbolism of each creature in turn. The last coin reunites all 10 beasts in one design, also including a lion, griffin, falcon, bull, yale, greyhound, dragon, unicorn and horse. 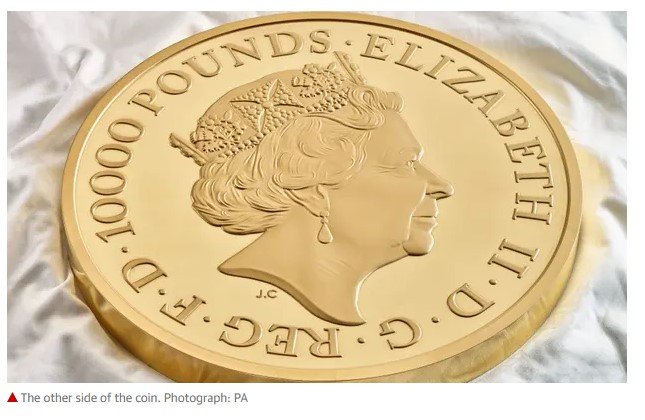 The other side of the coin. Photograph: PA


Clare Maclennan, the divisional director of commemorative coins at the Royal Mint, said: “We are delighted to unveil a Royal Mint first with the creation of the UK’s largest coin to celebrate the conclusion of our Queen’s Beasts commemorative coin collection. It is the latest in our Masterworks series, which offer unique works of art for collectors, exclusively from the Royal Mint.

“The Royal Mint’s Queen’s Beasts commemorative coin collection has grown in popularity since the first beast was introduced in 2017 and has become a firm favourite amongst coin collectors across the globe. This coin sets a new standard for minting, combining centuries old techniques with innovative technology to create a unique and beautiful work of art. It is the largest coin ever created by the Royal Mint, and is testament to the expertise, craftsmanship and skill of our team.”
Top

The Brits are just BEGINNERS if they think 10 kilos of gold is large.

Quite a “Chunk Of Change”!

Lots of stamp collectors also collect coins, and even if you do not, this is a pretty amazing story. Berlin police say thieves broke into the German capital's Bode Museum in late March, and made off with a massive 100 kilogram (221 pound) gold coin worth millions in bullion value.

Museum Spokesman Stefen Petersen said thieves apparently entered through a window about 3:30 a.m, broke into a cabinet where the "Big Maple Leaf" coin was kept, and escaped with it before police arrived. A ladder was found by nearby railway tracks.

The three centimetre (over 1 inch) thick coin, with a diameter of 53 centimetres (21 inches), has a nominal face value of $C1 million. But by weight alone, however, it would be worth around $A5.250 million at bullion market “melt” prices on today’s rates.

In October 2007, the Million Dollar Coin was certified by Guinness World Records to be the world's largest gold coin. The coins are manufactured at the Mint's Ottawa facility, where the Mint operates world-class gold and silver refineries, securely stores gold bullion, and mints all Royal Canadian Mint gold bullion products and collector coins. 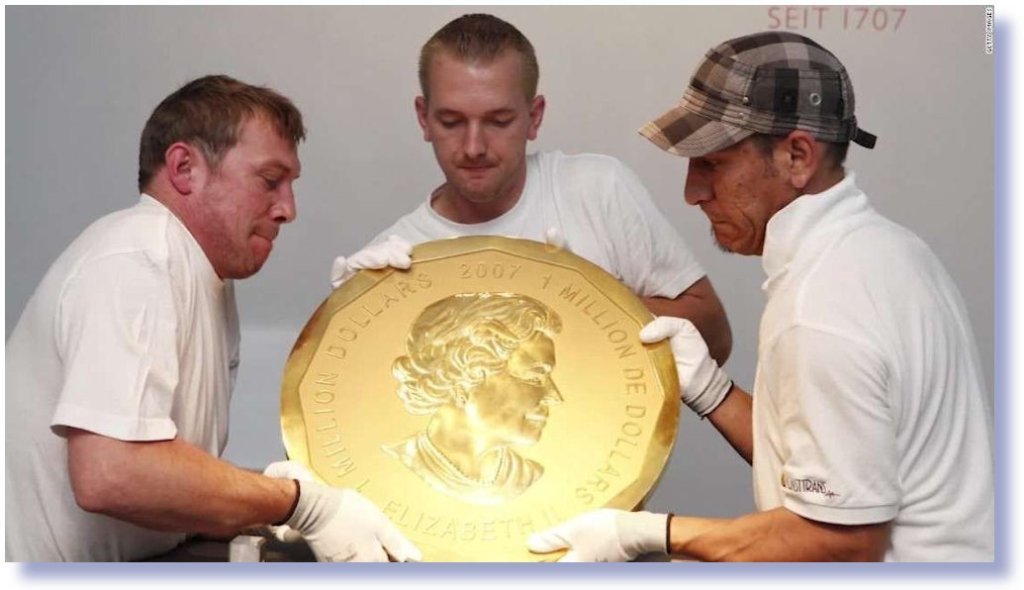 
After several interested buyers came forward after that publicity, the Mint decided to make a very limited quantity available for sale. To date, five of these gold bullion coins, weighing 3,215 troy ounces each, have been purchased by investors, from Canada and abroad.
.
Click HERE to see superb, RARE and unusual stamps, at FIXED low nett prices, high rez photos, and NO buyer fees etc!
Top

.
Anyway, wimpy Britain and Canada are not even in the RACE when it comes to GOLD.

Gold producing superpower Australia could not bear to be outdone, and in 2012 the Perth Mint produced a 1 TONNE Gold Coin (1,000 kilos) shown nearby, which in turn captured the Guinness World Records title of the world largest coin, knocking off the Canadians. “Melt” value of the bullion inside is a reported $A50 Million. 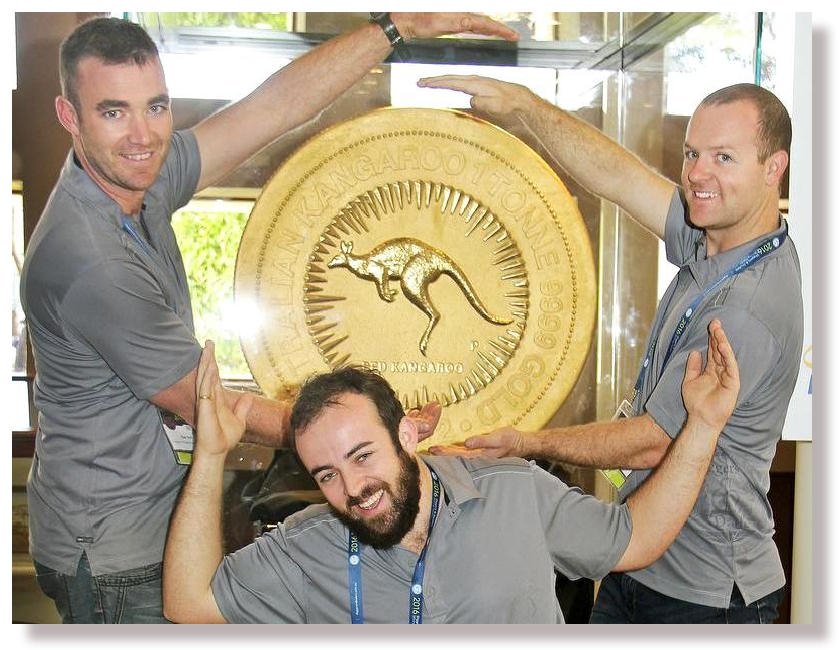 
This giant “Coin” is 80cms wide and more than 12cms thick - near 5 inches for American readers. The reverse depicts a bounding red Kangaroo as you can see bordered by the inscription “AUSTRALIAN KANGAROO - 1 TONNE .9999 GOLD” and the issue year date of 2012.

Issued as legal tender under the Australian Currency Act 1965, the obverse of the coin portrays QE2, and the monetary denomination is “1 MILLION DOLLARS”. The coin has done some overseas roadshows to Asia and to Europe and the mind really boggles at what the insurance was on $50 million!

The European media reported this month that the alleged Berlin thieves had been apprehended by German Police. The four men were accused of carrying out the spectacular heist of a giant solid gold coin from a Berlin Museum, have now gone on trial.

The men stand accused of stealing the 100kg “Big Maple Leaf” from the Bode Museum after using a ladder to enter a third-floor window, smashing the bulletproof cabinet in which the coin was on display, then transporting it in a wheelbarrow and skateboard to a nearby park, and abseiling with it to a getaway vehicle.

Three of the men on trial, identified only, as per the odd German practice as Wissam R, Ahmed R, and Wayci R, are members of a Berlin crime family. My research has revealed their surname is Remmo, and are from a Lebanese origin family, who have over 500 members living in Germany, with many ties to organised crime there, it is alleged

The fourth accused is a security guard identified as Denis W, and a classmate of the Remmo Brothers, who is accused of assisting the men, by providing them with “inside” information about the Museum which was vital to the plot. The men hid their faces behind magazines with holes cut out for their eyes, as they entered the court in Berlin, and during the hearings.

The massive “coin” is believed to have been broken up, and melted down shortly after the theft, and it is felt sure it will never be recovered. However if any of them are convicted, under German law, the value of the stolen item must be paid back to the rightful owner. OUCH.

Detectives revealed early on in the investigation that the Remmo family was part of a crime ring, well known to German Police, and whose members had carried out numerous high-profile crimes over several years, including break-ins, a bank robbery in which the bank building was blown up to hide evidence, and acts of violence in Berlin, including a murder in broad daylight.

Last summer Berlin investigators confiscated 77 properties valued at €9.3 million, which members of the Remmo family were believed to have purchased with the proceeds from various crimes. Shotguns and large amounts of cash were also reportedly seized in the raids, that involved 300 heavily armed Police.

The German Police seemed to have taken these raids very seriously, with all officers wearing balaclavas to protect their identities, and one photo nearby is from some of those officers taking part. Arrests were made. German Investigators later charged 16 of the Remmo clan with money laundering. 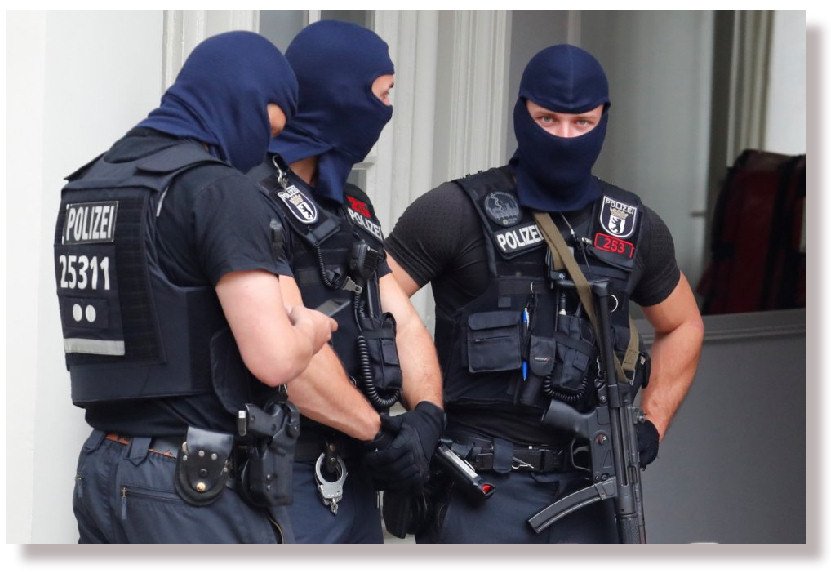 
The alleged thieves are part of a large “Arabic-Kurdish” family known to local authorities for its involvement in racketeering, drug smuggling and the arms trade. The Neukölln district in Berlin where they lived, has one of the highest immigrant populations in Berlin.

During the investigation into the coin robbery, prosecutors said that unknown persons had tried to destroy evidence in a vehicle believed to have been the getaway car, which had been confiscated after an illegal car rally. The culprits gained access to a police compound where the car was parked, and sprayed fire-extinguishing foam into its interior.

However this attempt to hide or destroy evidence failed, after police found gold deposits on the car upholstery, of a purity that matched the stolen mega coin composition identically. DNA left behind at the Museum by the burglars, and CCTV footage of them, also is said to be held by the German Police.

The trial was expected to take about 12 days, amidst a huge media presence, before a chamber of Berlin’s regional court reserved for youth crimes. Due to the ages of the three of the men, between 18 to 20 - when they allegedly carried out the heist. The men are not in detention, which seemed odd to me at least. If found guilty, they could face up to 10 years in jail. The verdict is expected to be handed down on 28 March.
.
Click HERE to see superb, RARE and unusual stamps, at FIXED low nett prices, high rez photos, and NO buyer fees etc!
Top

Odd, when I read it I thought it would be pictures of various members of the extended family (who shall remain nameless) ...

The Giant Stone Coins Of Yap.... 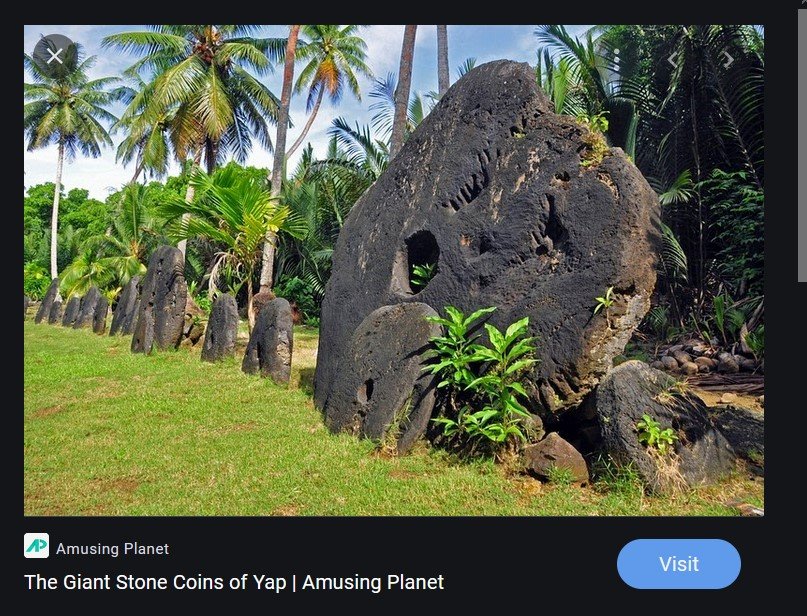 They have to produce a TV series about the Berlin case.
Top
Post Reply
6 posts • Page 1 of 1

Return to “Coins, Banknotes, tokens, medals and all things NUMISMATIC!”