A *LARGE* percentage of stamp collectors also collect various numismatic areas. This is YOUR little corner of the board to ask questions, seek advice, check values, and chat. Please join in!

.
I was a coin collector until 1991, so got to follow the ups and downs of coin grading from the beginning.

While there are a fair number of graded/slabbed non-US coins around, it's mostly for the benefit of US dealers/auctions. You still see British coin dealers grading coins the old-fashioned way, and they list coins with descriptions like "Good EF, NGC MS-63".

They realize coins (and stamps) are not commodities that can be sold sight-unseen. NGC also slabs ancient coins (they will pretty much slab anything you want to pay them to look at) which makes sense for authentication, but doesn't get you much of a price bump for grading.

My theory as to why coin slabbing caught on in the US, but stamp slabbing didn't, is that plastic holders actually make good sense as a way to store coins. Many people keep better coins in inert plastic capsules so you can look at your coins, and store them away neatly in a way they won't get damaged.

Aesthetically, they look better that way than in 2x2 holders. None of that is true for stamps, which do fine in albums/stockbooks/stockpages and look ridiculous in slabs.
.
Top

Re: Numerical Stamp Grading - will it ever occur outside the USA?

erich wrote: ↑
19 Apr 2021 08:52
.
While there are a fair number of graded/slabbed non-US coins around, it's mostly for the benefit of US dealers/auctions.

NGC also slabs ancient coins (they will pretty much slab anything you want to pay them to look at) which makes sense for authentication, but doesn't get you much of a price bump for grading.
.

Although slabbing may not increase the price of ancient coins by much it is a totally different story when it comes to US coins.

Third party coin grading started in 1979 when the non-profit American Numismatic Association set up their guidelines.

As we have often seen in this forum, highly graded stamps sometimes achieve very high prices. Often unreasonably high, based on most opinions in this forum, especially when the grading is not justified. Similarly, there can be a massive price differential between a top-graded coin and an average example. Not being familiar with the coin market, I make no judgement, but just offer the following as an interesting comparison.

The below coin recently sold for a whopping $43,200. It is a 1936 Cleveland, Great Lakes Exposition half dollar graded Mint State 68 by Professional Coin Grading Service with a green Certified Acceptance Corp. sticker. It is one of just two in this grade with none finer at PCGS. What made it stand apart was its rich color, with the cataloger observing “a blend of tangerine, violet, and olive-green iridescence,” adding, “These colors are emphasized by pearlescent underlying luster that softly cartwheels across each side.” 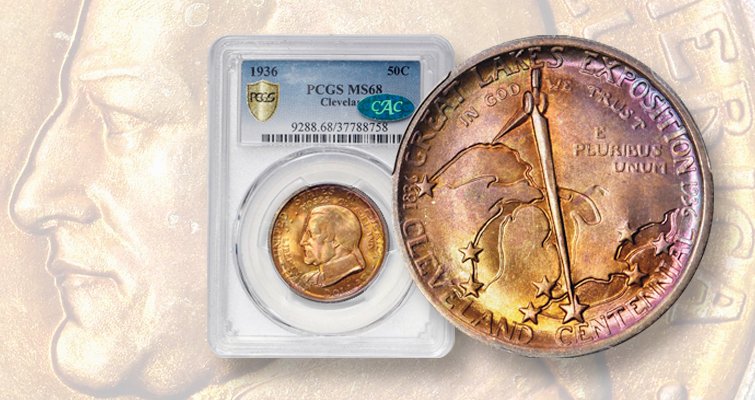 Return to “Coins, Banknotes, tokens, medals and all things NUMISMATIC!”