I noticed a few times where new forum members have difficulty differentiating between various printing methods of certain stamps.

I don't know if the following would be useful, but it is interesting.

I find it difficult to see any difference in the first 3, the photogravure is easy to tell. Maybe a written detail for each will help
Top

The engraved stamp compared to the typo and litho has very fine lines, sharper detail also notice the cross hatching around the 1S.

Its more difficult to see the difference between typo & litho I agree.

The typo has more of a coarse look, edges not too well defined/uneven, coloured areas appear blotchy whereas in litho the edges are neater, colour is more evenly distributed.

Lithography is just sharper and more detailed than typography which more or less remind me of old woodcuts.
Last edited by Global Administrator on 18 Oct 2015 11:51, edited 1 time in total.
Reason: Added paragraphs and spacing, which makes wordy posts far easier to read on Bulletin Boards!
Top

Here are a couple of more examples which shows the difference between typography and lithography quite well.
They are fro the East German (DDR) Five Year series, ugly stamps but interesting since they have a lot of varieties and also where officially reprinted.

lithograving wrote:Lithography is just sharper and more detailed than typography which more or less remind me of old woodcuts.

I got excited when you mentioned woodcuts, as that is one thing I like about the stamps I collect as shown below, which are relatively 'coarse' compared to the market trends. 8)

All of these are typographed stamps about 25mm high including perforations, showing some of the slight variations that can occur depending on paper texture and ink opacity/viscosity.

I do wish some of them had been done in intaglio; it would have been awesome.
Malaya's Timeless Design: the Universal Coconut Duty Plate
Top 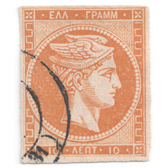 michailUK
Well on the way to 25 post Senior Member

Malaya wrote:All of these are typographed stamps about 25mm high including perforations, showing some of the slight variations that can occur depending on paper texture and ink opacity/viscosity.

These are some really impressive pictures Malaya! May I ask, what equipment are you using?
Top

michailUK wrote:These are some really impressive pictures Malaya! May I ask, what equipment are you using?

michailUK - thanks for your compliments, I'm glad you liked the pictures! I use a digital SLR camera with a macro lens on a tripod.
Malaya's Timeless Design: the Universal Coconut Duty Plate
Top

You can still enlarge lithograving's blown-up images without loosing any of their sharpness by holding the Ctrl and clicking up to six times on the "+" key on the right-hand side of the key-board.
Top

michailUK
Well on the way to 25 post Senior Member

Very useful information, thanks everyone! I have been trying to sort out some Greek stamps from two issues depicting mythological figures: the first one is engraved and was in circulation between 1911-1921, whereas the second one is lithographic and dates back to 1913-1924. I know for sure that the 15 Λεπτά (Lepta) and 80 Λεπτά stamps belong to the lithographic one:

However, if I didn't know that these were unique to the lithographic issue, I wouldn't have guessed it from the appearance, since I don't see the dot-screening pattern mentioned before.

Here is another example, this time same values printed in what appears to be the two methods:

From the cancellation on the second one (30.5.25) it seems that it belongs to the lithographic issue, and its appearance is indeed of lower fidelity than the first one.

As a final example, here is a stamp from a later issue (1942-1944 Landscapes). As far as I know there are no variations in the printing method here; yet, notice the thicker lines and fuzzier appearance of the second stamp (which also seems to exhibit the dot-screening pattern).

It is possible that the second one is a fake, but I am not sure why would someone counterfeit a stamp with catalog value about 0.20 Euros!

I guess my questions are: how can one distinguish between different printing methods (in this case engraved versus lithographic) without being fooled by variations of the same method (dirty plates, too much ink etc...). Also, does the lithographic method always exhibit the dot-screening pattern?
Top

I don't think lithography always has a dot-screening pattern as it is a matter of the design rather than the printing - correct me if I'm wrong. In this case it looks very much like typographed except that it does not have the "squeezing" of ink at the edges.

It is not easy to tell the difference even at very high magnification:

Giving this thread a bump, since we had a recent thread asking what the difference is between Lithography and Typography printing.