The Pom
I was online for Post Number 4 MILLION!

Looking into my crystal ball, I see lots of people trying to sell, but few takers. Can't wait to see what form it takes, and the terms & conditions.
Always on the lookout for Australian pre decimal First Day Covers.
Top

Global Administrator wrote: ↑22 Apr 2022 01:14 Well the SG share price slumped to a record low this week of a penny and a bit a share.

The GUANO did nothing for the Gibbons profit, (indeed it is an ALBATROSS now) or their share price, OR their reputation.


Hmmm, it appears that despite it being "PTS new business concept of the year" (

and a Rigs "strong buy" recommendation (

the initial period has now closed, and it looks like "a total unmitigated failure" (as predicted ( 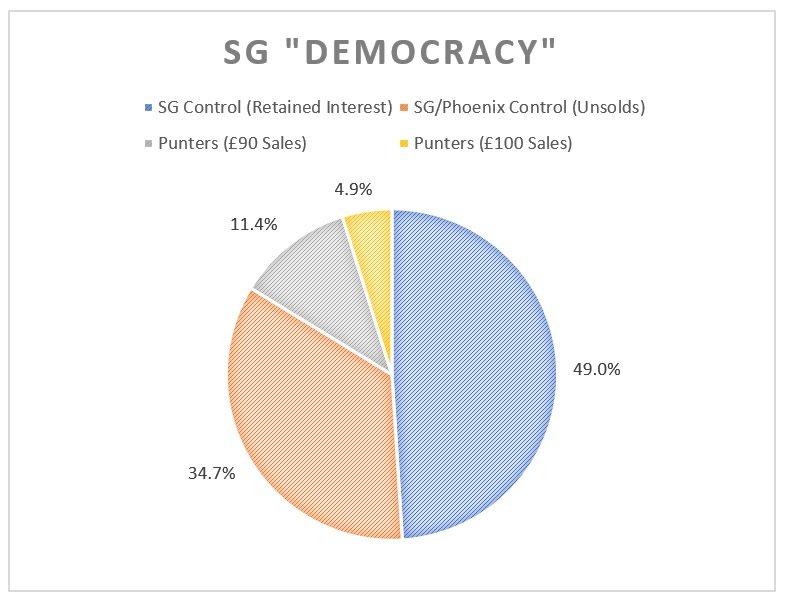 "A minimum of 83.7% still under their direct control"

And whilst I'm sure the holding company can suck up this cash shortfall ("by exceptional successes elsewhere" ?), I'm also "fairly sure" this "gaping hole in the accounts" is about to become the next "bottomless pit".

After all, Showpiece have PROMISED "a trading platform" for their fractional owned pieces, and its due this month (May 2022). Depending how they structure it, a "current trading price" will be established.

Either they just match offers to sell, to willing buyers, or they hold a buffer of transactional pieces on a spread...... Lets say buy at 95p, sell at 105p.

They will get very few customers at 105p to sell to, but possibly (n.b. speculation) quite a few "willing to sell at 95p". (You know.... the non stamp collecting speculators

Of the 1655 final customer count (The current customer base), about 1000 bought at the earlybird rate, so can wear an immediate write down to £90, without losing cash .... but what about the other 655 bunnies?

If they try to sell "at a discount", other than bad publicity, its going to have a ripple effect on both sales of any further units at £100, PLUS the value of the holding companies (minimum) 83.7%, which has to be valued at the lower of "cost" or "net realisable value".

(Selling their currently unsold stock into the market at lower prices would be a real undermining of their credibility, if it occurred.... In initial docs, they said "they'd only sell higher)

Of course, they could invoke a fairly standard procedure of "mopping up all offered shares", but that just digs deeper into net cash receipts.

Given the tight margins they were working on in the first place, the profit share scheme for the sold pieces, and the total selling and transaction costs (which were all for their account), I'm not sure "their increased turnover of £1.2M" (in the trading update) isn't going to dwarfed by record losses, when the full statement is declared.

Make a deal with the Royal Collection to trade the Magenta Albatross for some of their duplicates that would sell well at auction and allow SG to recoup their losses, and give the Magenta Albatross a fitting place to be retired before it ends up disintegrating from improper care.
APS #173088 Stamp Catalog Coordinator for Colnect Online Catalogue https://colnect.com/en/stamps
Top

DJCMH wrote: ↑14 May 2022 16:40 Make a deal with the Royal Collection to trade the Magenta Albatross for some of their duplicates that would sell well at auction and allow SG to recoup their losses, and give the Magenta Albatross a fitting place to be retired before it ends up disintegrating from improper care.


Best suggestion of the Month.

DJCMH wrote: ↑14 May 2022 16:40 Make a deal with the Royal Collection to trade the Magenta Albatross for some of their duplicates that would sell well at auction and allow SG to recoup their losses, and give the Magenta Albatross a fitting place to be retired before it ends up disintegrating from improper care.

I don't think trying to rip off a 96 year old, swapping tat for "the good stuff" would go down well, even if they could get approval from all the "beneficial owners".

Even "the suggestion" should see their Royal Warrant torn up.

As I recall, the British Guiana 1c is the only major Commonwealth classic era Rarity not owned by the Royal Collection?

It would be a very good fit in there in my view, and thankfully then remove it from the Barnum and Bailey circus atmosphere that has befallen it in recent decades.

KGV tried desperately to buy it at Auction, but wealthy US Industrialist Maurice Burrus outbid him.

'All the beneficial owners' of the Royal Collection is as I understand it - the Monarch, not the UK taxpayers?

Plenty of times material from the Royal Collection has been sold off or swapped to secure pieces they sought.

One thing I wish I had not sold was this Roo pair:

The 'privy purse' is responsible for the private income and assets of the Queen.

Sold off my Rarity page, but one of my favourite pieces - and is posted here for the record and the possible interest of others: 8)

This Roo pair came from the QUEEN'S COLLECTION. It was obtained by King George V who was very keen on the Kangaroo issues. It may well have been an official presentation pair from Australia.

The pair was auctioned about 20 years back from the Royal Collection, when a few selected duplicates were sold by Spink to raise funds for an expensive purchase for the Collection. (Spink are the Royal Auctioneers, holding THREE Royal Warrants.)

The sale was permitted because the Stamp Collection is the personal property of the Queen, inherited from her philatelist grandfather, King George V. It is not part of the Royal Collection of paintings, china, furniture and other works of art, which the Queen holds in trust for the nation.

The two stamps have a Royal Philatelic Society London, Expert Committee, Certificate of Genuineness which accompanies the lot. As you can see the submitter of the pair was: "The Keeper Of The Privy Purse" The stamps come in the original special lot folder from Spink, inscribed "The Royal Philatelic Collection - May 17, 2001".

The stamps are from position 14 and 15 on the left pane. the RH stamp has the constant variety 51(D)L ($6,500) "Break In Value Circle At Left". Believed unique in any kind of multiple, mint or used. (Not noticed by the RPSL.)

Provenance such as this should add 25% over the price of any other pair - themselves very rare multiples. For anyone putting aside stamps as an investment for a few years, a pair with variety coming direct from the Royal Collection will ALWAYS get a great price, and much interest and comment.

Almost nothing on the market - from any country - is originally from the Royal Collection. Bright and attractive, having been in the Northern Hemisphere for all of the past century - most unusual. Superb colour.

A client in Maryland USA bought it, and offered it to me a few years later. It is easily worth double now what I onsold I for. Top end material seldom goes backwards.

The Royal Collection VERY quietly sold off 3 blocks of the Imperf Kookaburra Mini Sheets via Spink, as the uncut sheet of 15 sheets was too long to fit on the King's large album pages! 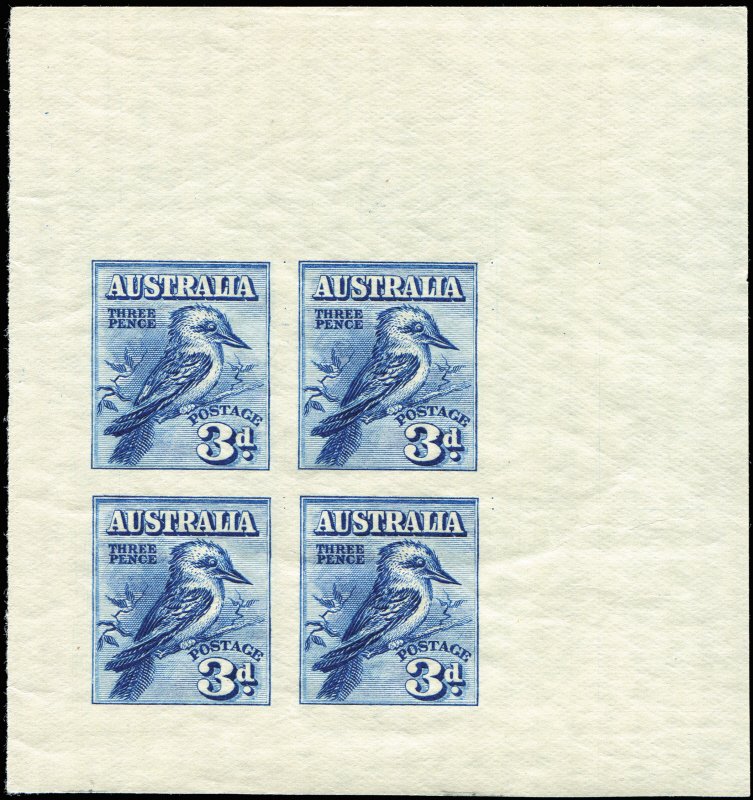