** PLEASE NOTE: To keep this forum manageable you may post additions to any thread in the forum however - the thread leader or a Forum Admin may then add your information to the initial post and DELETE your post. In this thread, posts in the correct format may be kept, but comment posts will be edited as above.


This thread is a WIKI for

The aim of this thread is to have an online visual catalogue for the faults and flaws of the 1d red Kangaroo And Map stamps of Australia.

To do this we require your input.

If you have an example of a fault that you can post, with the pane number and the position on that pane.

Then just post it at the bottom of this thread.

And we will do the rest.


YOUR SCANS
Please if possible scan your stamps at 1200 dpi and then place them in your photobucket account at the 15-inch screen setting.

If this cannot be done, place your scan anyway it will hold it place on the thread until another 1200dpi scan comes along.

The 1200 dpi setting gives a good size picture, as you will see below.

Trim the scan, a little bit of black background is OK but we don't want a half-inch border around it, again look at the scans below.

The definitive study of the 1d Red Kangaroo issue is 1d Red Kangaroo and Map Series: The First Stamp of the Commonwealth of Australia, written by David Adams, Bill Bell and Greg Pope, and published in September 2004.

The 2004 book identified 100 Unlocated Constant Varieties (UCVs), which are flaws or varieties where more than two identical clichés have been found to exist, but which have not been plated. Subsequently some of these UCVs have been plated (see, for example, http://www.stampboards.com/viewtopic.php?f=10&t=4131&start=3500#p4553050), and probably others identified.

David Adams has continued his research and has uncovered 25 additional UCVs. He has kindly allowed images and short-descriptions to be displayed on StampBoards. These are being progressively posted below.

To me, some of the flaws and/or descriptions are unclear, but they “are what they are”, and I remain grateful to David for allowing them to be posted.

To be consistent with the original 2004 book the new UCVs are labelled UCV101 to UCV125.

.
UCV102
Die I: Scratch left of P of POSTAGE with, on some copies, Break below U of AUSTRALIA
Top

UCV106
Die IIa: Break first live above and left of O of ONE
Top

.
UCV120
Die I: Break over left side of U of AUSTRALIA
Top

.
UCV121
Die I: Colour spot over A of AUSTRALIA
Top

.
UCV122
Die I: Colour spot over S of AUSTRALIA
Top

I see now that you are not showing images of all the stamps like in KGV thread..as i understand it we only scan the flaws themselves.?

Some key facts about the 1d Red Kangaroo


In describing the position of flaws, frequent reference is made to key locations on the Australia map. A good example is "Shading below Halifax Bay: 0.5 mm break in line 6".

Adams, Bell and Pope note the following regarding Plate A.

Plate A is composed of Die I clichés and was printed along with Plates B, C and D in a 480-on configuration. Plate A was retired in January 1913 after only a very short life.

Consequently, there are few varieties and the material is in short supply. It is an unsolved mystery as to why Plate A was retired so early. Whatever the answer, Cooke (the government printer) cut the plate up for use as additional postal stantinery electrotypes.

The diagram below shows the positions of individual clichés on a plate of 120 units. The plate comprises left and right panes divided by a central gutter. The positions of the watermarks (POSTAGE, etc.) shown on the diagram are reasonably accurate. Being an upper plate Plate A does not have printer monograms.

Constant varieties identified in the Australian Commonwealth Specialist Catalogue (2017) (ACSC) are indicated by the lettering used in the Catalogue. Thus, for example, the cliché at position 1L1 has the letter d, meaning that this is the position of the ACSC-listed flaw 2(A)d. Note that the ACSC identifiers start at d and run to h.

The positions of constant flaws and their descriptions come from the following sources: 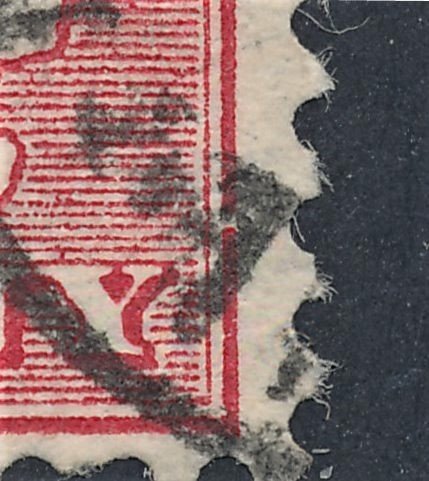 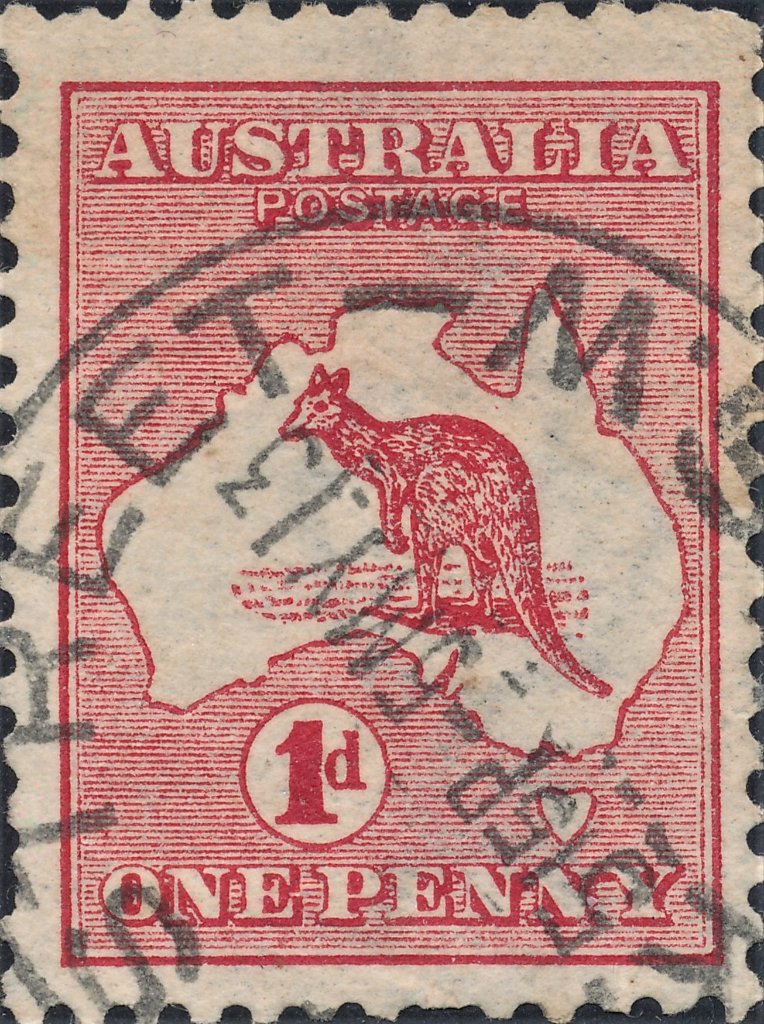 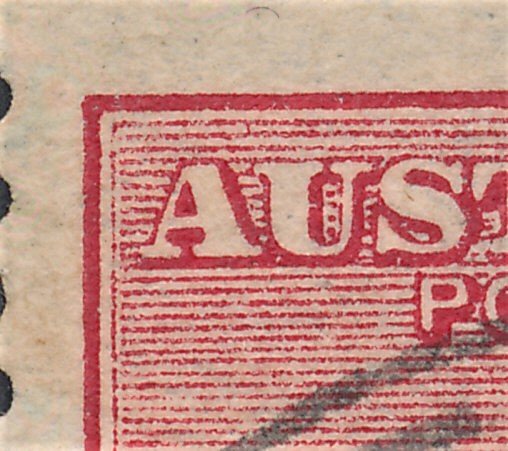 AL14
Diagonal scratch through second, third and fourth lines below O of POSTAGE

"
Diagonal scrathc through second, third and fourth lines below O of POSTAGE, averaging 7.25 mm distance from the left frame."
.

.
Image provided by David Adams (sadly not a relative)
Top

"
Break above I of AUSTRALIA: top inner frame and first line below inner frame, 4.5 mm from right frame."
.

Note, as pointed out by rsellens, the image below is not of AL23. It is of BL50. The position of the LH notch is the same on both stamps (hence I'll keep the image below), but there is a secondary marker on BL40 which is not on AL23. That secondary marker can be seen on the stamp below: "S of AUSTRALIA: break in top outline, 5.5mm from left frame"
. 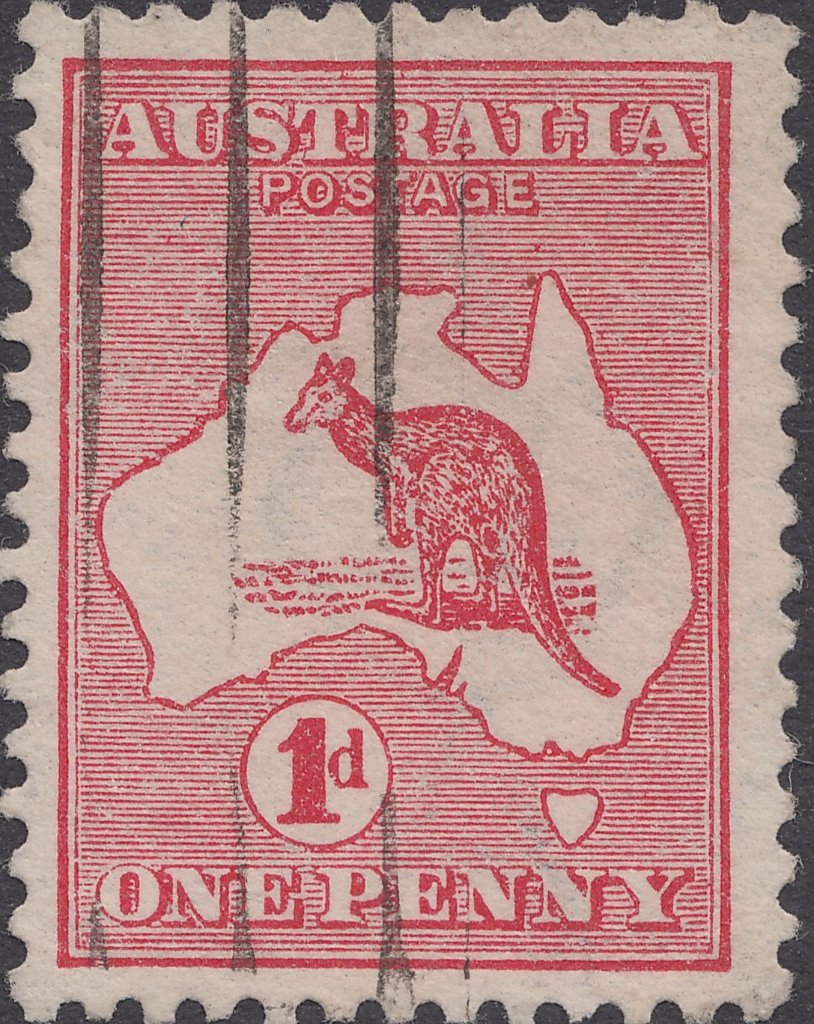 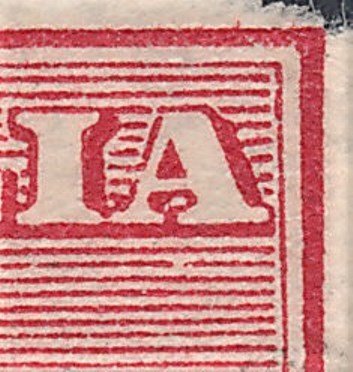 ABP provide additional detail: "Shading below last AU of AUSTRALIA: fine scratch starting at line 2, 2.5 mm from left frame, emerging from the SA coast and ending at 12 o'clock on the value circle."
. 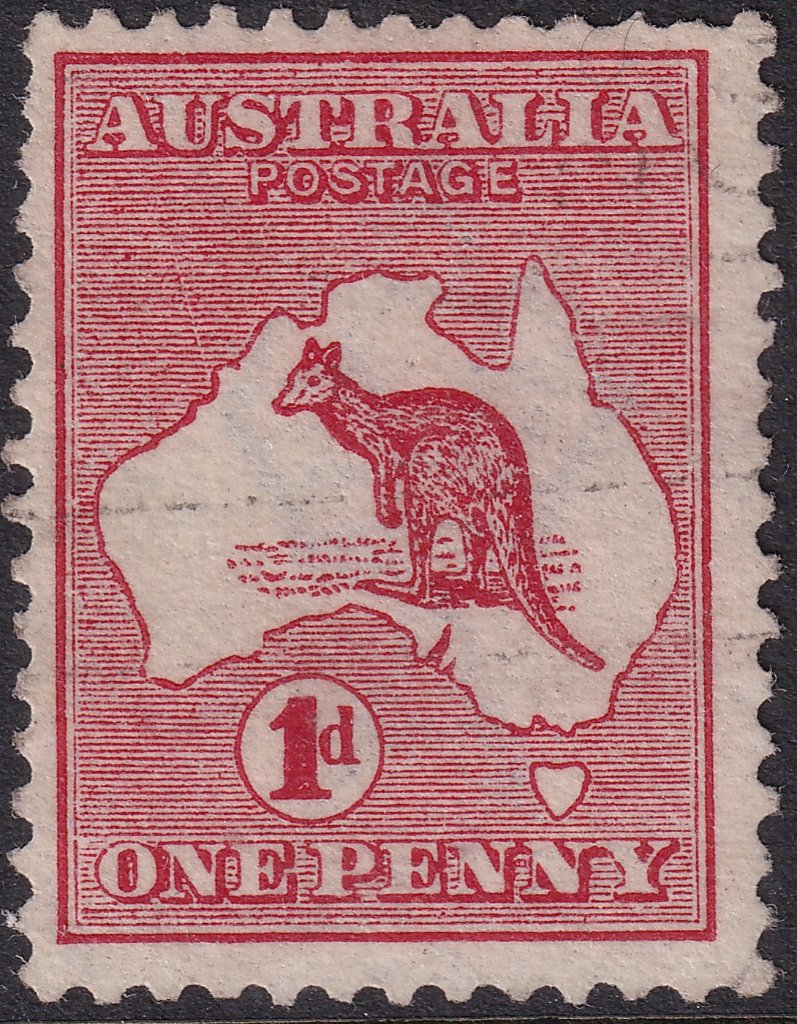 ABP provide additional detail: "Fine scratch starting at left inner frame to coast near Cape Treville, then continuing below map and ending at value circle at the right end of line 8 counting down."
. 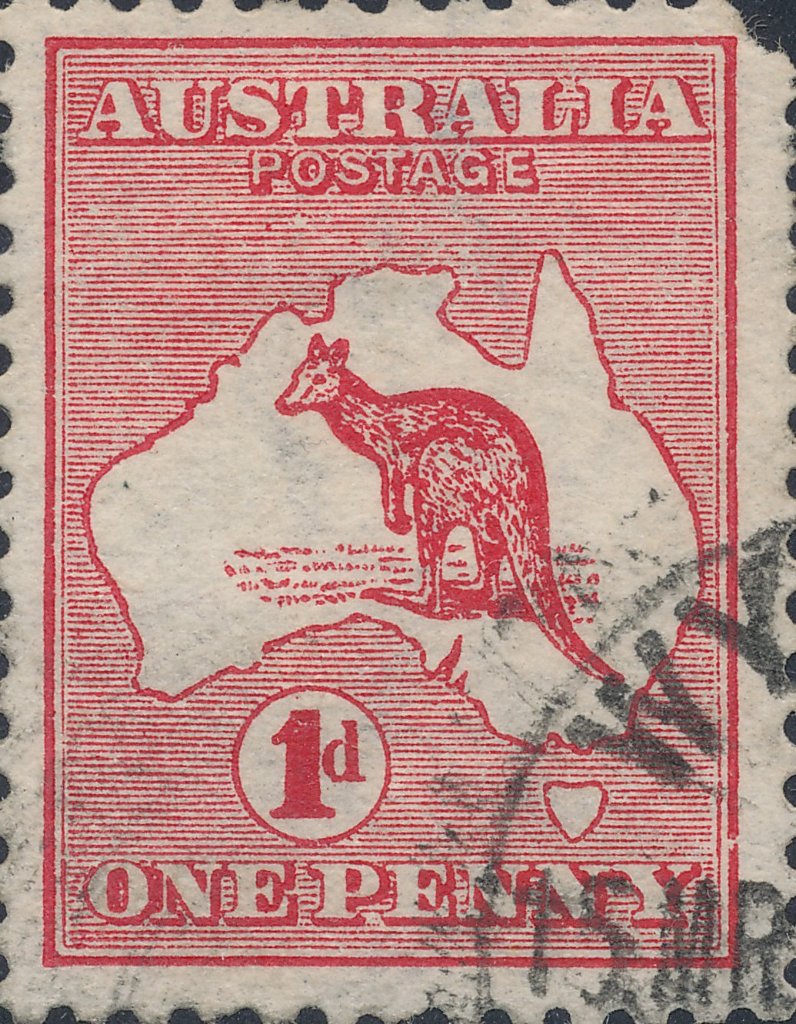 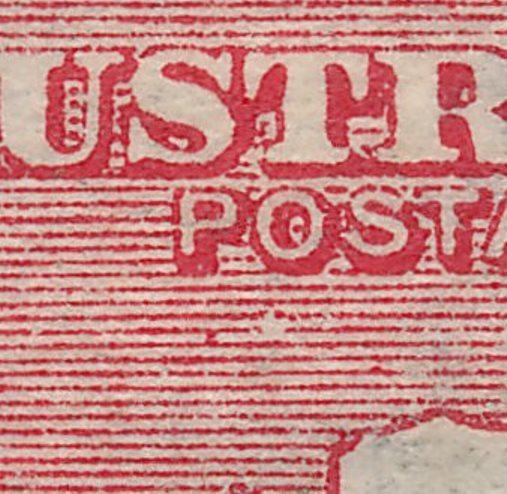 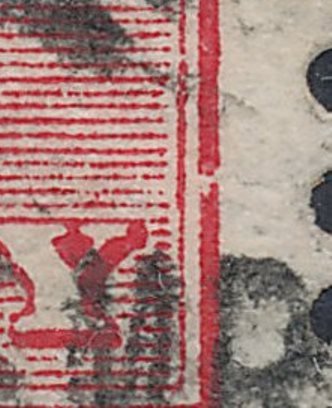