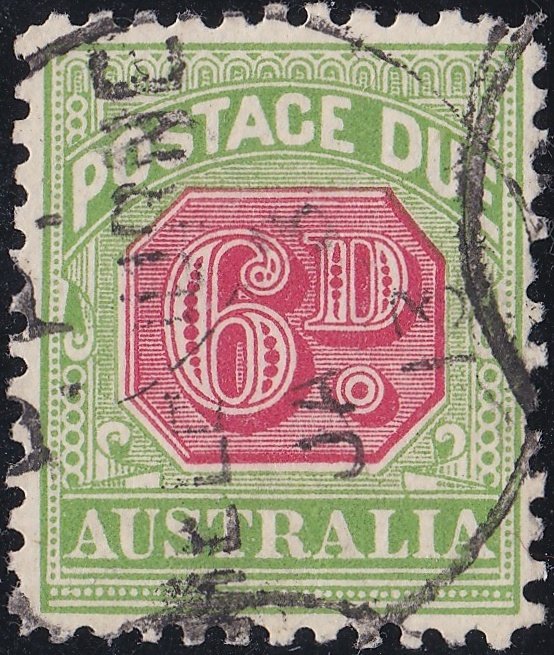 According to BW, “The first recorded example of this stamp was discovered in 1922. Four examples can be confirmed. These comprise two mint and two used examples, of which one of each are in the Royal collection.”

There was no issue of the 6d on thin paper (saving any argument as to what our particular stamp is). It seems that there must have been the odd sheet of the double lined A watermarked thick paper caught up in the perf 11 printings, which resulted in the 1d SG D74, and 2d SG D74a.

Of the 1d thick paper perf 11 BW states, “The variety is reported in the philatelic literature in December 1912 but used examples date from late 1914 and early 1915 (Qld, Adelaide, Melbourne etc cancels). Of the 2d, only two examples have been discovered. One is unused without gum (discovered in 1972) and the other is pen cancelled and undated (discovered in 1988).”

WHEN is auction David, and what is estimate?
.
Click HERE to see superb, RARE and unusual stamps, at FIXED low nett prices, high rez photos, and NO buyer fees etc!
Top

I suspect that it will be next year. We first have to get the stamp certified. I am told that the vendor is happy with this for RPS,L.

I understand that they are currently closed due to corona virus .....

RPSV would carry as much weight. And a lot faster.

Does not need to be Expertised really, as perf 11 cannot be faked onto that one and fool even a Blind Nun.
.
Click HERE to see superb, RARE and unusual stamps, at FIXED low nett prices, high rez photos, and NO buyer fees etc!
Top

CofA paper was not introduced until 1931 - 3rd watermark paper replaced the Crown over double lined A in 1922 for postage dues except for one printing of the 1/- in 1923.

Following discussions with the vendor over the past weekend, he has agreed for this rare stamp to be placed in our 12 September 2020 public stamp auction. This will be held at the West Plaza Hotel, in central Wellington, New Zealand.

Further details about this public stamp auction will be available in due course and may be found online at: www.mowbrays.co.nz