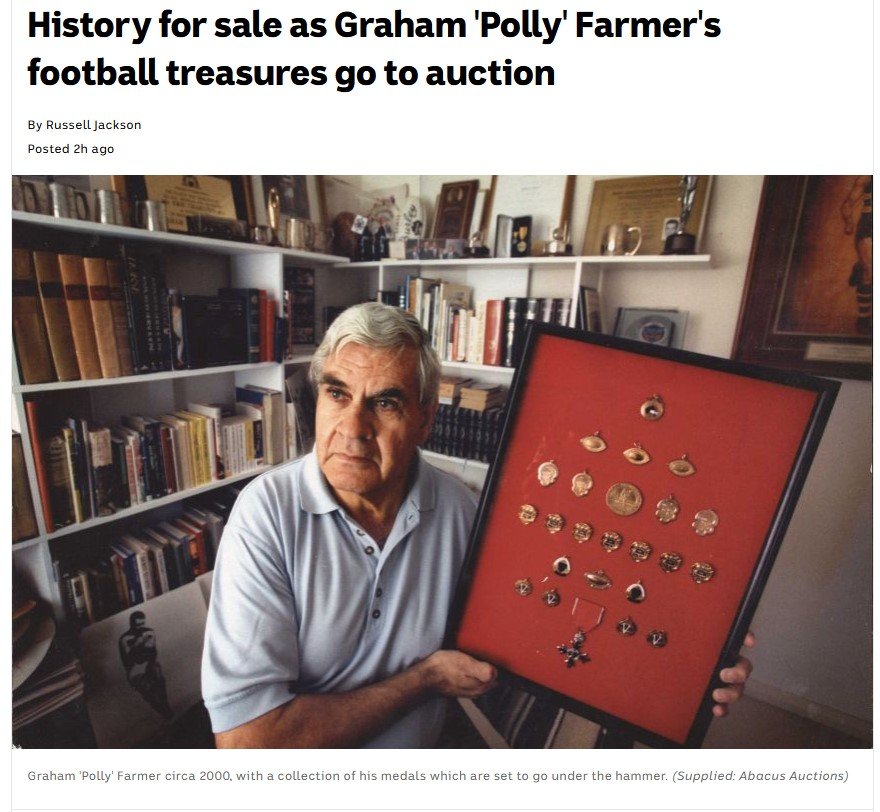 Graham 'Polly' Farmer circa 2000, with a collection of his medals which are set to go under the hammer.(Supplied: Abacus Auctions)

When the sporting treasures of Australian football pioneer Graham 'Polly' Farmer arrived at Melbourne's Abacus Auctions a few months ago, it was inevitable there would be something unique among the carefully packed items

The eyes of auctioneer Max Williamson were immediately drawn to an eye-catching gold medal with a map of Australia on the face, each state marked by its own coloured enamel outline. Every bit as distinctive as the man who won it, it was the 1956 Tassie medal claimed by Farmer as the best player in the 1956 Interstate carnival.

Brownlows, Magareys and Sandovers have hit the auction market at increasing rates in the past few decades (Farmer's trio of the latter are now up for grabs too), but Williamson believes Polly's is the first Tassie to be offered.

The Hall of Fame Legend won it en route to claiming his first WAFL premiership and Sandover medals that year, achievements which confirmed his rise to pre-eminence. 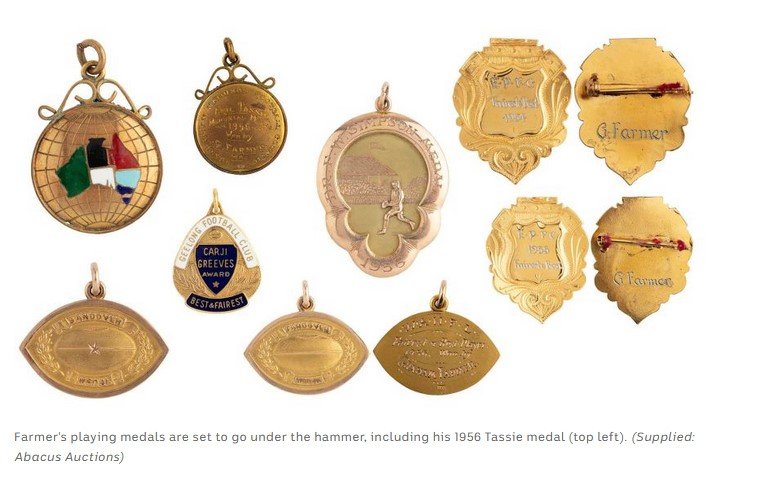 Farmer's playing medals are set to go under the hammer, including his 1956 Tassie medal (top left).(Supplied: Abacus Auctions)

The haul includes premiership and best and fairest medals from Farmer's days at Geelong, East Perth and West Perth, plus his Simpson medals and his MBE — the first awarded to an active player. 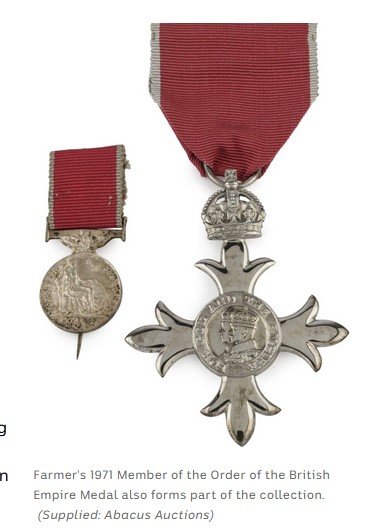 Farmer's 1971 Member of the Order of the British Empire Medal also forms part of the collection.


Williamson says that having made the long journey across from Perth for the sale, it's likely that several key items will take a return trip, as Western Australian collectors look to secure everything from cufflinks, trophies and scrapbooks, to a crystal jug presented to Farmer on the occasion of his 300th Western Australian Football League game.

Photographs on the block include the unforgettable shot of Farmer handpassing a ball across a road and through the partly-open window of a Holden HR station wagon, taken during Geelong's premiership year of 1963. 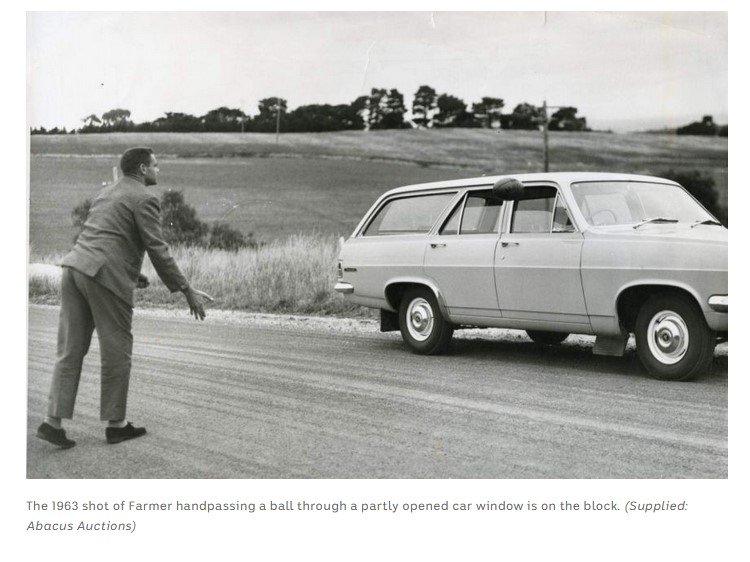 The 1963 shot of Farmer handpassing a ball through a partly opened car window is on the block.


Even Hawthorn and Richmond supporters are catered for, although the items in question pose a painful 'what if': they are letters from both clubs, dated mid-1961, enticing Farmer to play for them and not the Cats.

"Polly was a member of the Stolen Generation and he grew up in a children's home, and it was important to the family that his entire history was told.

"So, there are documents relating to that in the sale." 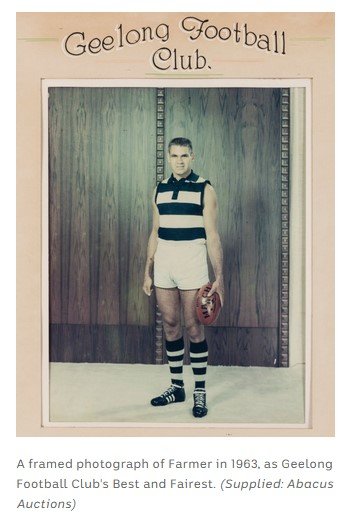 A framed photograph of Farmer in 1963, as Geelong Football Club's Best and Fairest.


Even before this auction, Farmer was a significant figure in the world of sports memorabilia.

Of the increasingly prized 1963 Scanlens footy card set, Farmer's card is the most valuable because of its scarcity.

Urban myth has it that Polly's card was on the bottom corner of the large sheet from which the manufacturer cut the cards; when the blade came down it took off too much at the edge and quality controllers discarded the imperfect Pollys.

The Farmer auction continues a trend for grand clearances of items associated with sporting legends.

The sale that kicked things off for Williamson was Shirley Strickland's items.

In recent decades, other greats to clear out the trophy room include Ron Barassi, Greg Chappell, Len Thompson, Greg Williams and Mark Waugh.

"We get excited when we get a player's own collection, whether it's a footballer, a cricketer or an Olympian," Williamson says. 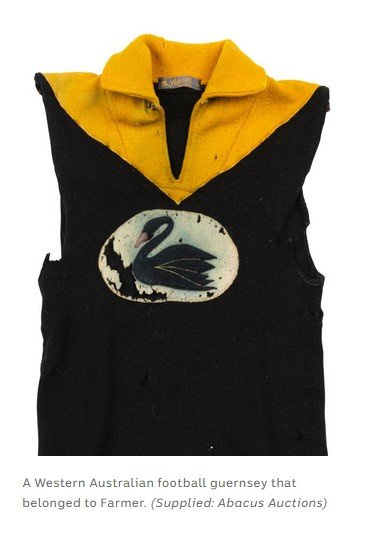 A Western Australian football guernsey that belonged to Farmer.

Beyond the superannuation bump, the reasons for living superstars parting with their treasures are many and varied, from downsizing to divorce.

Posthumous sales are often a relief for families looking to simplify the division of estates while finding loving homes for important pieces of sporting history that would otherwise languish in safety deposit boxes and sock drawers.

In Australia, 'celebrity' sales still err more on the side of tastefulness, or at least lovable naffness (the Bob Hawke and Russell Crowe auctions tested this theory) than the naked opportunism of the American market; at the Jackie Kennedy sale of 1996, Sotheby's took eleven loose diamonds worth no more than $500, arranged them in the shape of a 'J' and coaxed bidders up to $17,250.

On the buying side of sales like the Farmer one, private collectors dominate the field at the best of times. 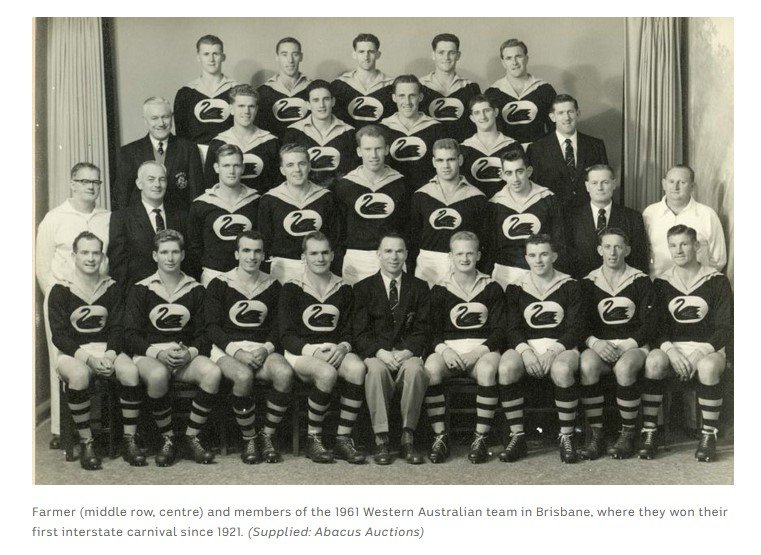 Farmer (middle row, centre) and members of the 1961 Western Australian team in Brisbane, where they won their first interstate carnival since 1921.

Now, institutional investment in sports memorabilia looks like taking a further hit as a casualty of COVID-19 austerities.

Leagues, clubs and museums are carefully watching the bottom line — not to mention insurance premiums.

Rare are the benefactors like former Essendon chairman Paul Little, who purchased Barassi's entire collection in a pre-sale deal so that it wasn't split up and scattered around the country. But even that sale highlighted an obstacle for bulk buyers: to date, there has been no decision on how and where the Barassi haul will be displayed. Curation, storage, security and maintenance are additional costs that many holders of sporting gems aren't keen to bear.

Williamson is now in his sixth decade selling sports memorabilia, having started out in stamps.

In the early days of the industry, he says, cricket was the dominant field of collecting, and at the higher end remains so.

Wisden Cricketers' Almanacks are still the linchpin of many a collection, although the market is softening due to older collectors completing their sets and not being replaced by a new generation of enthusiasts. Similar can be said of baggy green caps, which have flooded the market in recent decades; many serious collectors have now ticked them off the bucket list. 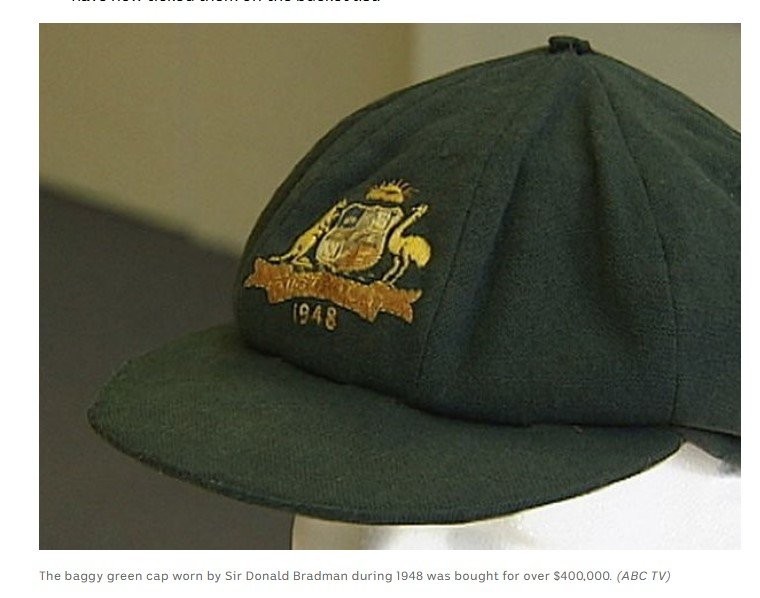 Like most auctioneers, there is not much Williamson won't sell.

The Farmer items appear in a catalogue which contains, among other curios, Greg Chappell's MBE (estimate: $1200), Bruce Reid's kit bag, the saddlecloth from Americain's 2010 Melbourne Cup victory, and a baggy green cap whose appearance shatters certain modern myths about the Australian Test cap: it is signed inside "To Keith, Many Thanks, Steve Waugh", and was presented by the former captain to a WACA dressing room steward.

Perhaps the scarcest item in the sale relates to another Aboriginal sporting champion, Eddie Gilbert, the 1930s fast bowler who rattled Bradman.

Gilbert's signature, vanishingly rare, is available at the bottom of a hand-written note on Barambah Aboriginal Settlement letterhead.

Williamson says autograph sheets and books from Gilbert's time in the Queensland team rarely contain the fast bowler's scribble, and hypothesises that it probably reflects prejudices of the time — he thinks schoolchildren, then the predominate autograph hunters, must have been advised not to approach Gilbert.

Like all auctioneers, Williamson always hopes for the appearance of something truly unique and sacred, like Monty Noble's 1909 Ashes urn, which he sold for $80,000 in 2017, or the time he auctioned the late John Kennedy Snr's ancient Hawthorn jumper. The Hawks were aghast when they got wind of the latter sale. It couldn't possibly be Kennedy's, they said: he'd worn only one for his entire career.

To clarify the matter, Hawthorn's most revered figure showed up at the sale rooms, held the woollen relic against his chest and ran his fingers over the front. It was the Real McCoy; Kennedy could feel the St. Christopher medal his mother had sewn inside the jumper to protect her boy. Now it resides in Hawthorn's museum.

"When you're a collector, it's all about the thrill of the hunt," Williamson concludes.

"It's such a huge thrill when you fill that gap in the collection. You want to have that piece that nobody else has got." 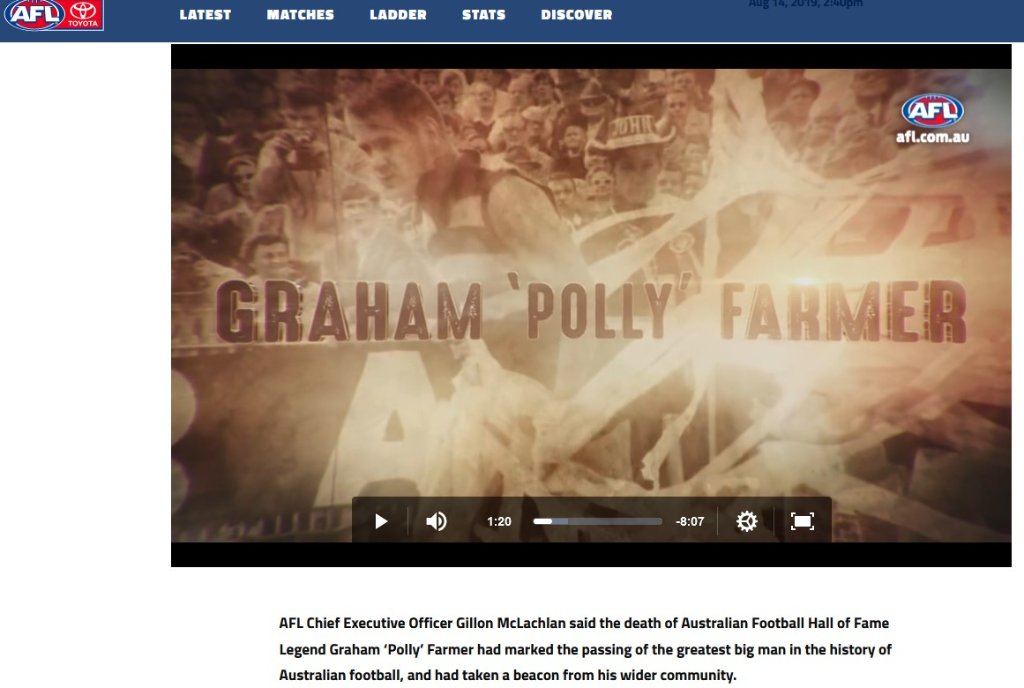 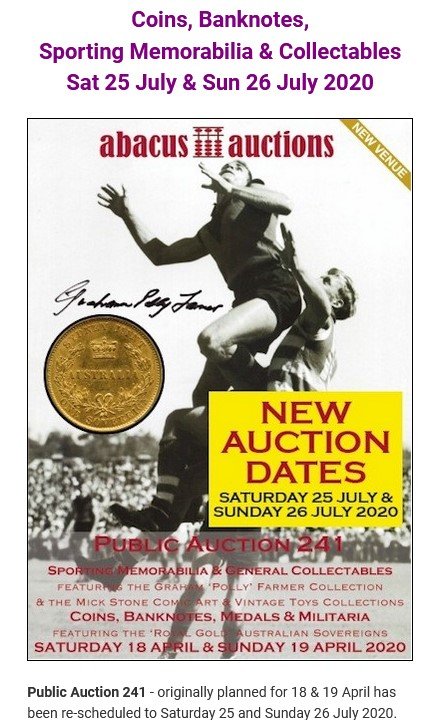 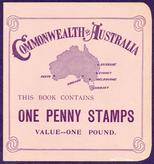 Did we ever find out who bought the Strickland collection?

As the article says, Paul Little bought the Barassi collection but the benefactor of the Strickland collection remains anonymous.
Top

“It did happen with Shirley Strickland’s collection, when a group of collectors got together to make an offer for the whole thing. In the end, the items were withdrawn from auction and acquired, which was in keeping with what Shirley actually wanted – and ultimately on-sold to the National Sports Museum.”

Users browsing this forum: No registered users and 0 guests