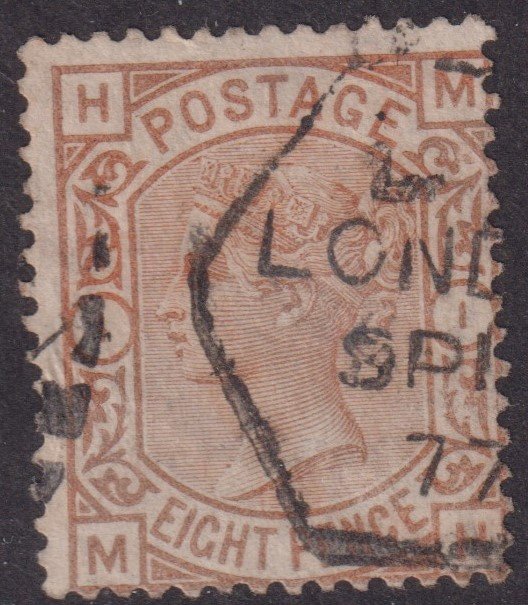 I have an 8d orange of 1876 which would normally not be worth shouting about.However it does look to be more purple brown than orange.

It is also used which would be a first as this particular stamp was never issued in that colour. It all adds up to my question,is this genuine and if so is it a case of colour being soaked out etc.

It is watermarked with large garter so looks not to be too suspicious.

Answers would be greatly appreciated .

Thanking you in advance
.
Last edited by Global Administrator on 22 Jan 2021 12:23, edited 2 times in total.
Reason: Added pars and spacing and “air” – always a superb idea on Bulletin Boards! Use the "PREVIEW" button folks. It is there for a GOOD reason. Added COUNTRY.
Top

It is watermarked with large garter
.


It is an oxidised colour changeling, common on older Orange colour stamps.

However if it has a large garter watermark it will be truly unique.

thankyou for clearing that one up for me.Just to confirm,the watermark is large garter and this is as per the SG specialised catologue so bit confused as to the slight sarcasm regarding that.Appreciate you are the experts but thats whyi asked,cheers anyway
Top 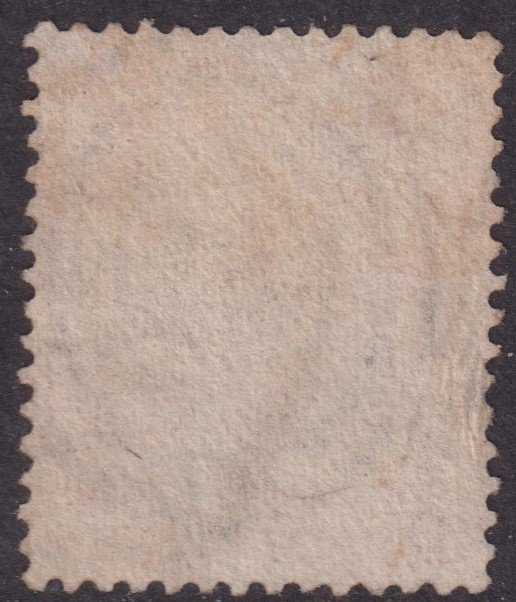 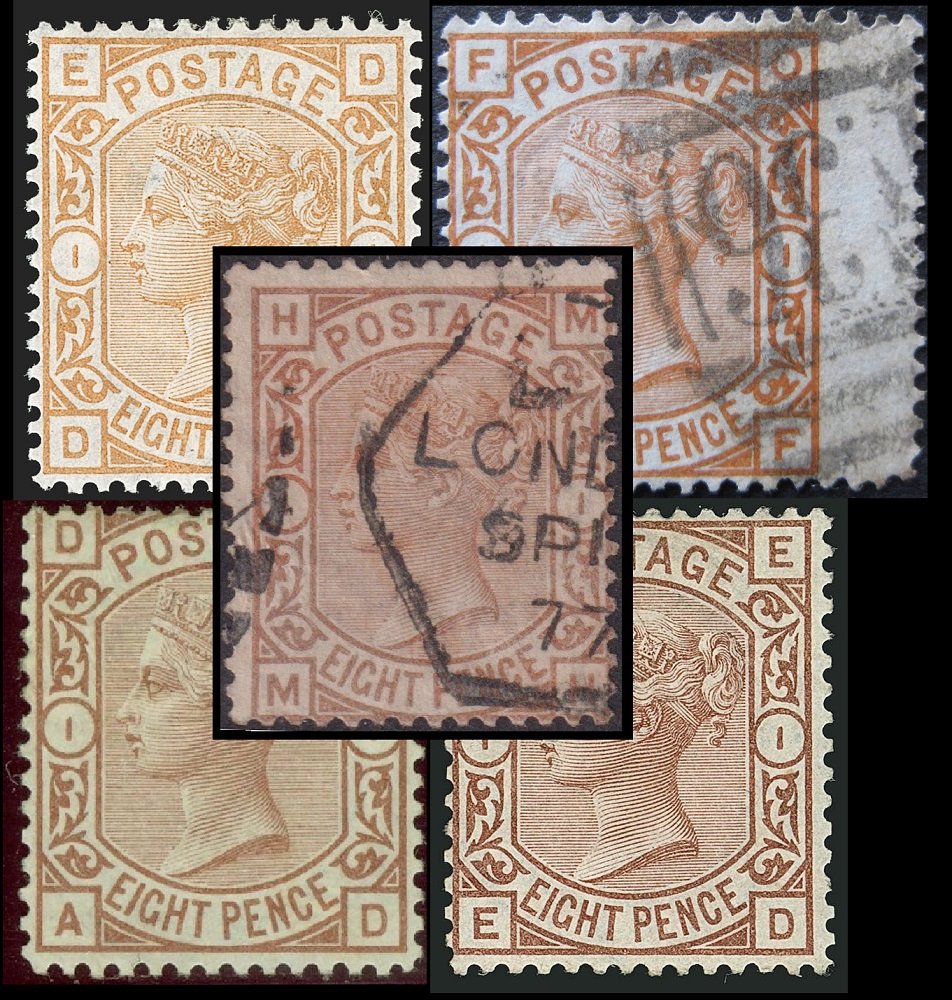 Whilst sg156 is perhaps best associated with a fairly vivid orange, it does have a wide spectrum of colours when exposed to certain chemicals.

I think yours, shade wise, contains too much orange glow to be a 156a, and to my eye, its closer the top right example (although I can see why you queried it).

At present, there are only two known examples of sg156a used. Here is one of them .... 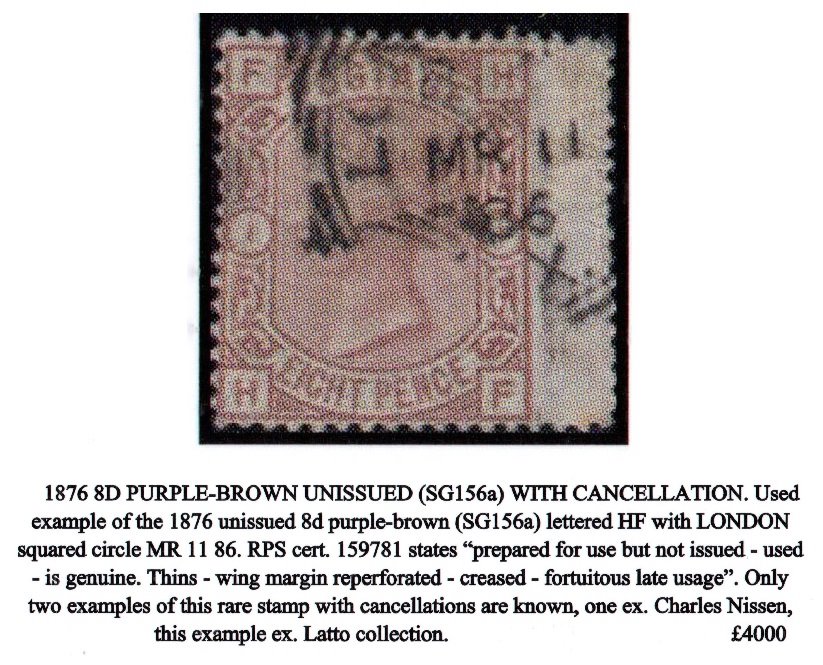 Unfortunately, scanners, printers and auction catalogues all take their toll on colour nuances, but if you hold your example up to the Latto example, you should clearly see the orange hue, which should simply not be present on the purple-brown variant.

thankyou so much.Great to have some comparables to view it against.stay safe my friend
Top

Unfortunately, scanners, printers and auction catalogues all take their toll on colour nuances

Yes, each scanner does them differently! Oranges very often do strange things in bleaches and chemicals etc.

Bought this in an envelope of kiloware from 145 years back this week, that also had several 6d Greys on small piece etc.

Still on piece with a neat, crisp Scottish "131" Edinburgh numeral being 100% complete, and being unsoaked, no colour funny business has occurred! 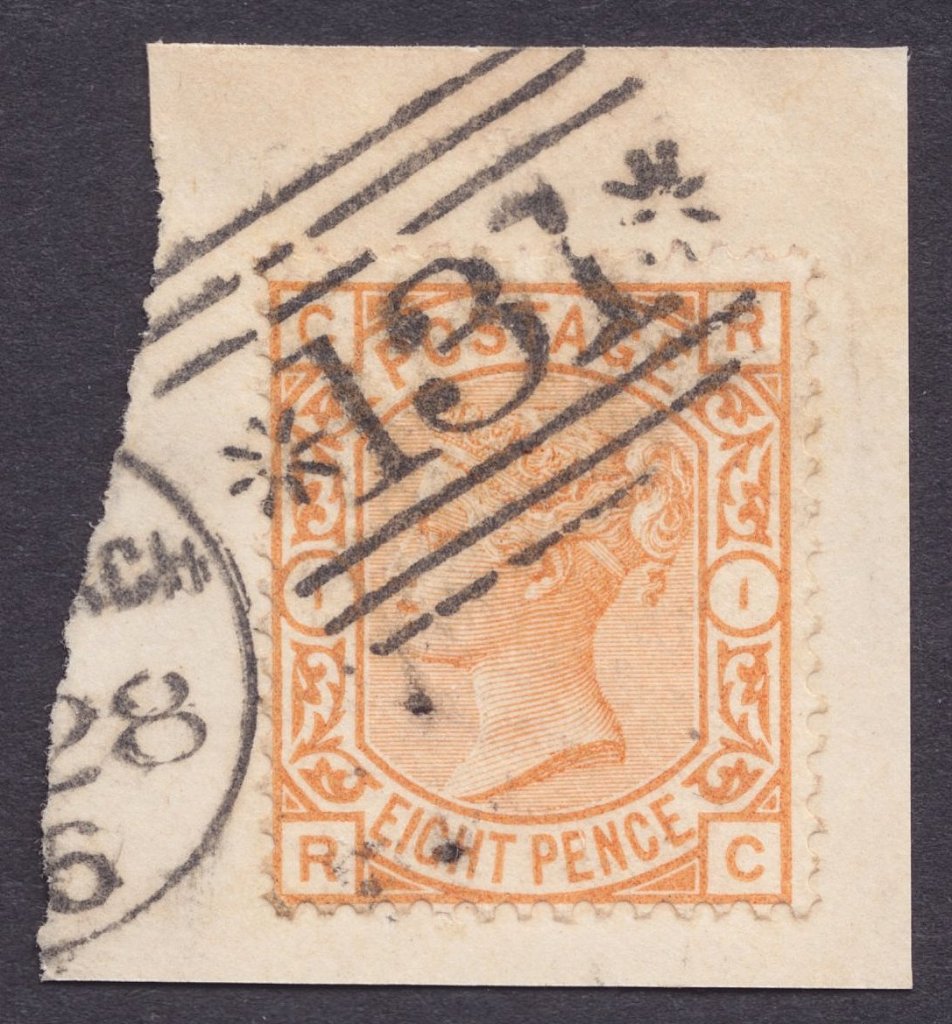 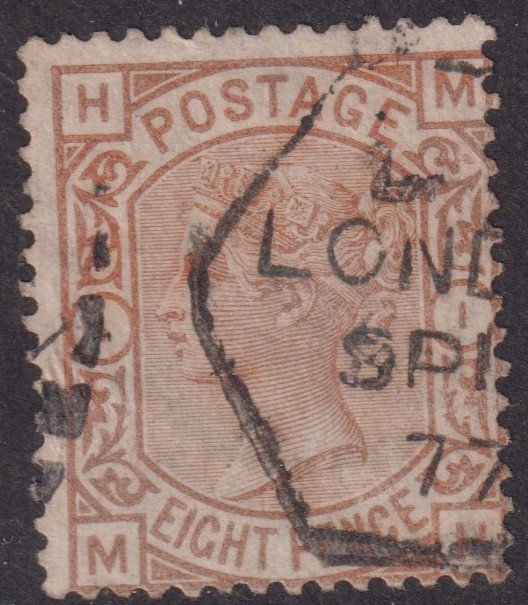 Trust the Sheriff to find a fine full colour example of the sg156 Orange.

We do, occasionally, delve into debates on colour, richness, tones and densities etc, but this stamp is a prime example of "how difficult it is, often" to fairly represent "the stamp in front of you".

For example, here are some file pictures of sg156. 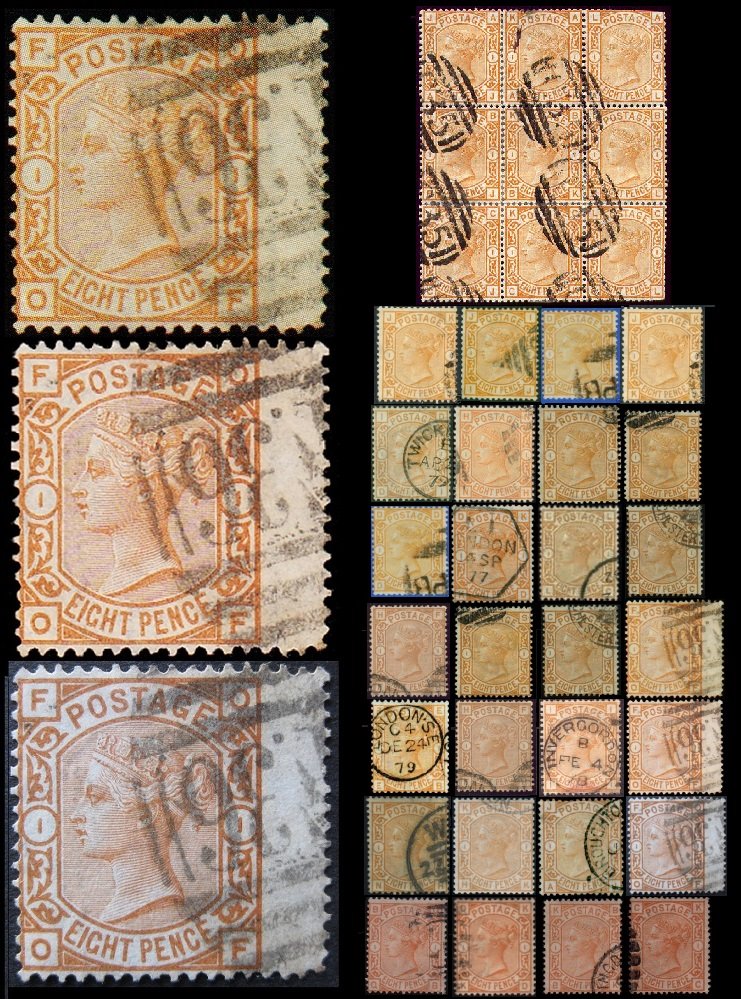 sg 156 exhibiting "A range of shades"

Now, the three on the left are actually all the same stamp, as listed by eBay, a reputable auction house, and a PTS dealer. I'm not saying which is which, but the top exhibit has a yellow cast, and the bottom exhibit has a blue cast (central one is about neutral), so you can see that a knowledgeable stamp buyer still has to make a colour judgement, even when a clear scan is shown. 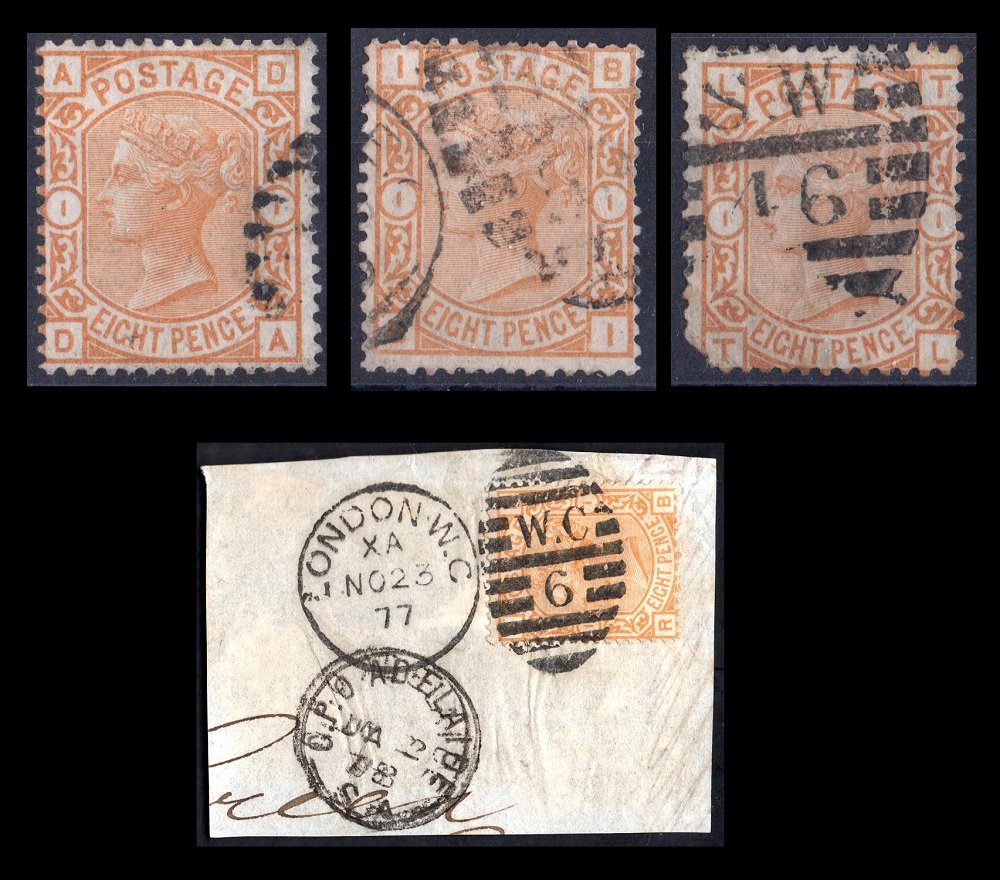 Going to Google doesn't help to establish "definitive colour", either ... 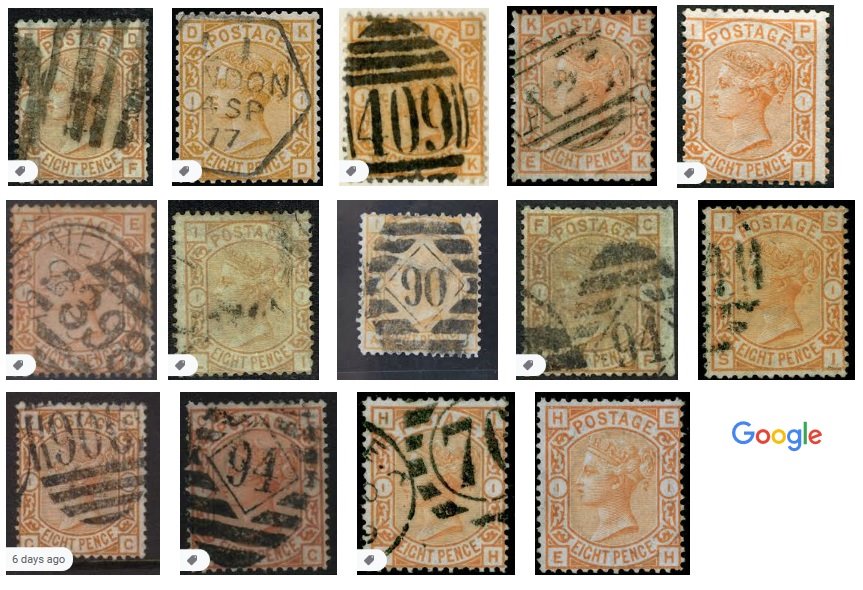 And even a professional auction house, using the same scanning equipment, on consecutive lots in an auction, will not achieve a reliable "colour reference point".... 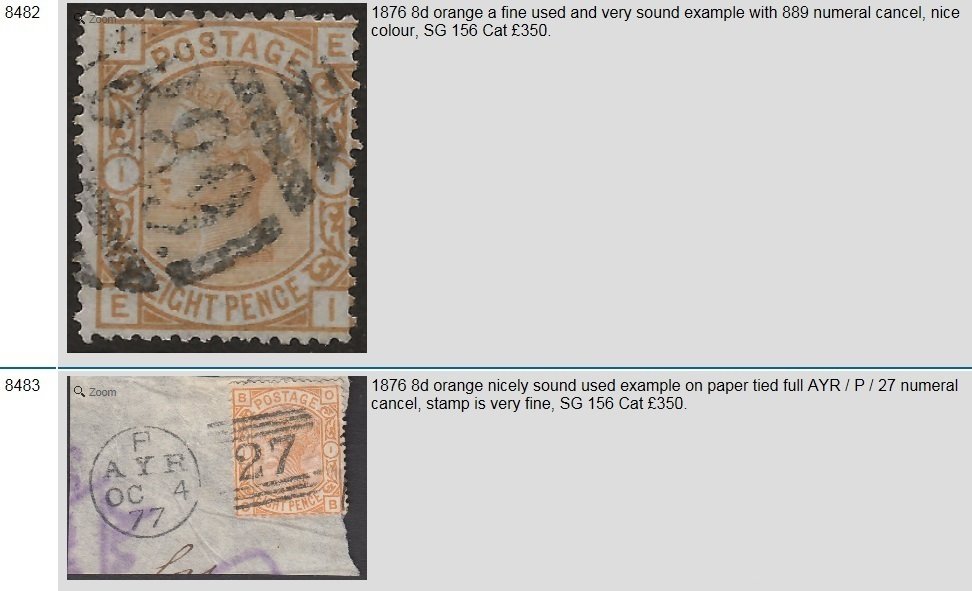 Its when they come off paper that the most colour variance starts to creep in.
The 8d, in its day, paid for a letter to Australia, a registered item to Europe, or a chunkier item sent within the UK.

Your example, unless its toning creeping into the equation, looks like it may have come off brown backing paper when soaked off. That gives it a darker tone, which favours the blue end of the spectrum.

Here are the slivers I referred to earlier ....(Yours is in the middle). 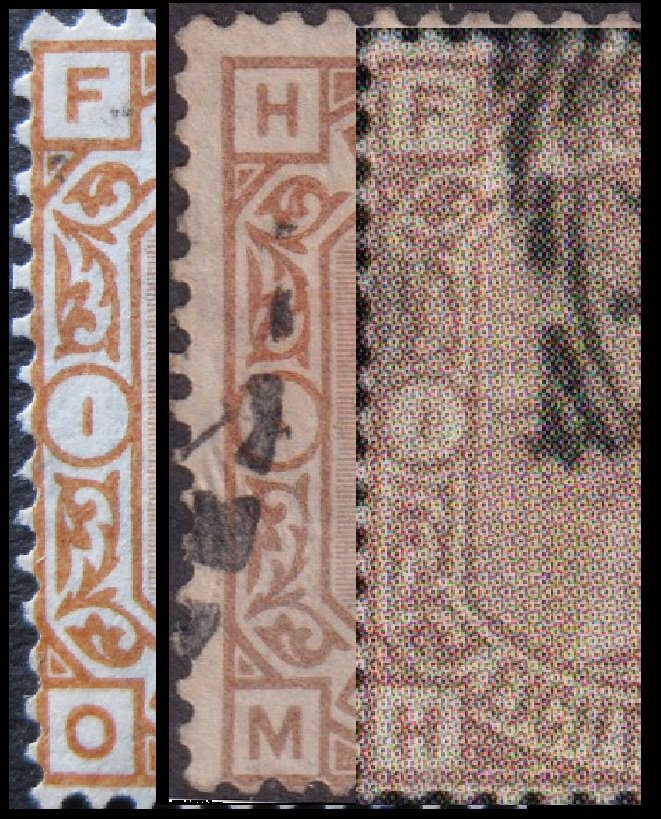 1) Whilst there is a superficial match to right, the orange tones, on top of the yellow tone contained in the substrate, favour it being a SG156.

2) There are only four sheets of SG156a known (with only two stamps currently known in used condition), but in every SG156a I've seen, the perforations all favour narrow left margins (ie the printed centre is always to the left of stamp, or central). The only place I've encountered a right bias, like yours, is amongst the SG 156 population, where numerous examples exist.

May not be good news today, but at least you know what to look out for (and how to mentally adjust what you see)!!
Top

Presumably if only a few stamps were used from the very limited number of sheets printed, they would have been used at about the same time. The genuine example has an 1886 date stamp and the example here is 1877. 9 years difference??
Top

wilko wrote: ↑
23 Jan 2021 10:55
Presumably if only a few stamps were used from the very limited number of sheets printed, they would have been used at about the same time. The genuine example has an 1886 date stamp and the example here is 1877. 9 years difference??

If they were counter sales, sure, but these were NEVER released, so the used ones might possibly be some that "leaked out in the gentlemans club, but the philatelist wanted it used".

SG156a was actually the first stamp of this value to be produced, but purple brown was rejected as being "too close to the 2½d Rosy Mauve" (Introduced the previous year). 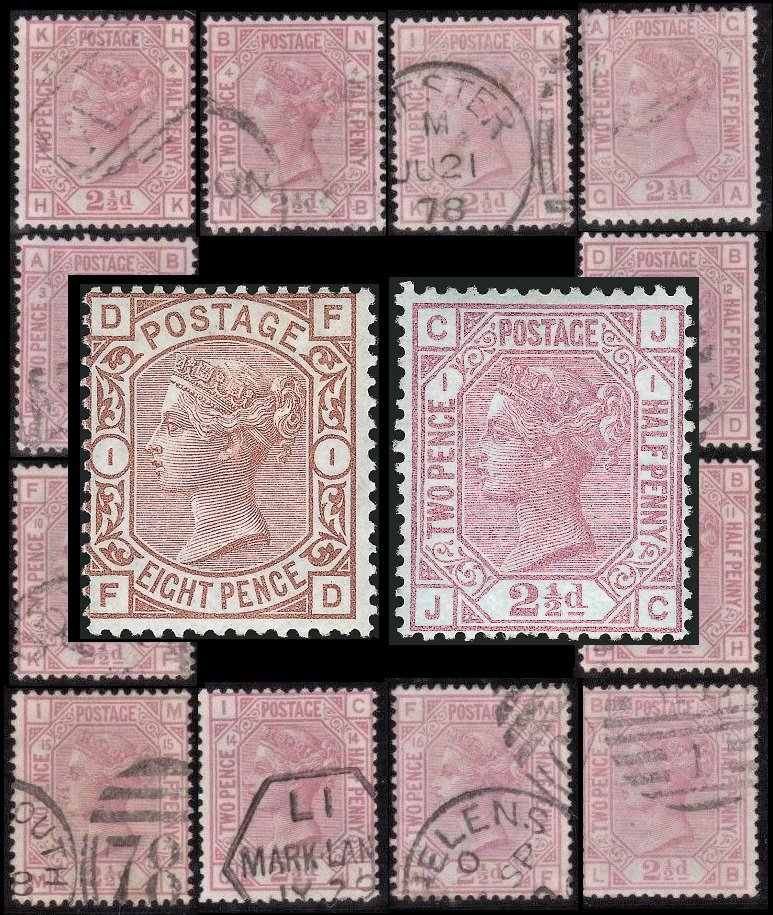 Why SG156a was not approved

SG156 in Orange was "the revised colour scheme".

Logically, if a sheet (or quarter) had slipped out during normal processes, I'd expect usage dates on par with sg156, not later usage.

So, technically, any date from July 1876 is possible..... and one of the nice things about stamps is that "there may be another used one out there, in the next old album, or pile of covers, you look in".


Thanks Sheriff.... I know I rambled on a bit about scanners before, but here's the output side of the same problem - "interpretation of colours" ...... (All from exactly the same stored file).